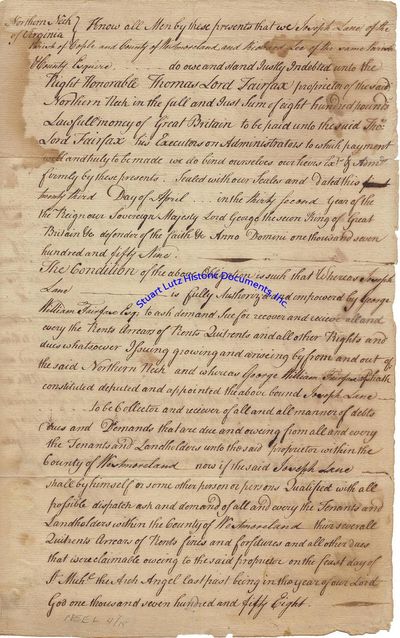 signed
by RICHARD HENRY LEE
RICHARD HENRY LEE (1732-1794). Lee, a Signer of the Declaration of Independence from the prestigious Virginia family, first became involved in revolutionary activities by resisting the Stamp Act and Townsend Acts. In 1774, he was sent to the Continental Congress and in June 1776, introduced the first independence resolution. He was voted president of Congress in 1784 and opposed the Constitution, though he heavily favored the Bill of Rights. DS. 2pg. 8” x 13”. 1758. Virginia. A lengthy legal document signed “Richard Henry Lee” at the conclusion, along with “Lucy Lee”, “Richard Lee” and “Jos Lane”, a prominent Virginian. The land document is between “Joseph Lane…and Richard Lee of the same Parish…do owe & stand Justly Indebted unto the Right Honorable Thomas Lord Fairfax proprietor of the said Northern Neck in the full and Just Sum of eight hundred pounds Lawfull money of Great Britain to be paid unto the said Thos Lord Fairfax…to be collector and receiver of all and all manner of debts, dues and demands that are due and oweing from all and every the Tenants and Landholders unto the said proprietor within the County of Westmoreland…”. It is signed at the conclusion on the second page. Joseph Lane served in the General Assembly and was a lieutenant colonel in the Whiskey Rebellion of 1793. The document has dark writing, paper seals after the Lane and Lee signatures and light staining to the top margin. The condition is very fine. (Inventory #: 4870)
$2000.00 add to cart Available from
Stuart Lutz, Historic Documents, Inc.
Share this item