Andrew Jackson Signs An University Of Nashville Diploma, Along With Several Other Prominent Tennesseans 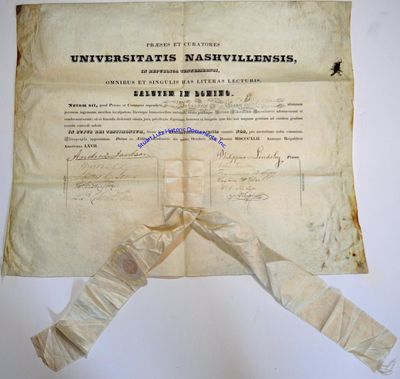 signed
by ANDREW JACKSON
ANDREW JACKSON (1767-1845). Jackson was the Seventh President. DS. 1pg. 22” x 17”. October 5, 1842. Nashville. A large vellum diploma for the University of Nashville. The document was signed by several “curatores”, such as “Andrew Jackson” as former President, John Bell, Philip Lindsley, James C. Jones, G.W. Campbell and R.J. Meigs. The diploma was for “Johannem Sean”. Lindsley was the President of the University of Nashville; John Bell was a Senator, Secretary of War and 1860 Presidential candidate; James C. Jones was then Governor of Tennessee; G.W. Campbell was both a Senator and Secretary of the Treasury; Ephraim H. Foster was a Senator; and R. J. Meigs III was a Tennessee jurist. Princetonian Philip Lindsley came to Nashville to assume the Presidency of Cumberland College (soon chartered as the University of Nashville) in 1824 and, during a more than quarter-century tenure, built the school into the pre-eminent mid-South educational institution. Jackson strongly supported the school and solicited funds for it from others. Its prestige can be surmised in this document from the joining of political rivals; for example, Bell, originally a Democrat and later a Whig, was normally at odds with Democrat Jackson, while Jones was also a Whig who defeated Jackson's favorite James K. Polk for Governor. After the Civil War the university lost ground to newer competitors and, late in the Nineteenth Century, it split into three ongoing separate institutions. The vellum has a dark Jackson autograph, some edge wear to the vellum but is in fine condition, and two long white silk ribbons attaching a seal. A most unusual Jackson signed document. (Inventory #: 4852)
$2,000.00 add to cart Available from
Stuart Lutz, Historic Documents, Inc.
Share this item