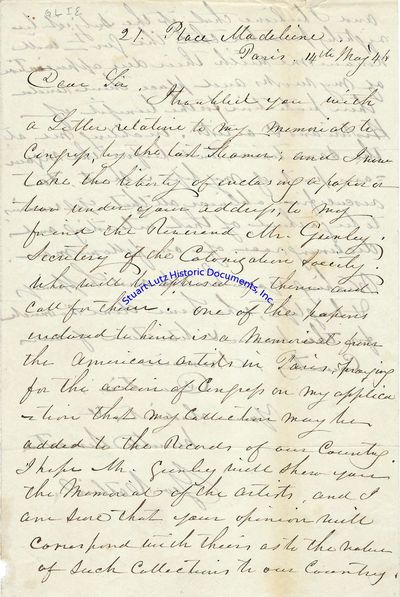 signed
by GEORGE CATLIN
GEORGE CATLIN (1796-1872). Catlin was American traveler and painter best remembered for depicting Plains Indians in their natural habitat during the 1830s. ALS. 2pg. 5 ½” x 8 ¼”. May 14, 1846. Paris. An autograph letter signed “Geo Catlin” to an unidentified correspondent: “I thanked you with a letter relative to my Memorial to Congress by the last Steamer; and I now take the liberty of enclosing a paper or two under your address, to my friend the Reverend Mr. [Ralph Randolph] Gurley, Secretary of the Colonization Society, who will be apprised of them and call for them. One of the papers enclosed to him is a Memorial for the American artists in Paris, praying for the action of Congress on my application that my collection may be added to the records of our Country. I hope Mr. Gurley will be will show you the Memorial of the Artists, and I am sure that your opinion will correspond with their as to the nature of such collections to our Country and I believe that if the subject be rightly presented that the Govt will honour me with their due appreciation of my works and that them under their protection for the benefit of Historians and artists, enabling me that the same time, and before the vigourous part of my life is spent, to rescue from…all that yet remains, to be gathered of that interesting and declining race of our fellow man. Wishing you health and happiness & long lone, who have done so much for the honour & literature of our Country, I remain Dear Sir your obedient & humble Servant Geo Catlin”. After painting many Native Americans, he, in 1838, created a traveling exhibition of his works with stops in many Eastern cities. The next year, he took his works for a European tour. By the mid-1840s, he was begging the Federal government to buy his entire collection, but they refused, leaving his financially precarious. In 1852, he sold his paintings to the industrialist Joseph Harrison. Eventually, and after his death, many of his works were acquired by the Smithsonian’s American Art Museum and the Huntington Library. Gurley (1797-1872) was a long-time member of the American Colonization Society that advocated returning free African-Americans to Africa, and he helped found the colony of Liberia. The letter has a light chip in the lower corner that affects nothing. (Inventory #: 4867)
$5,000.00 add to cart Available from
Stuart Lutz, Historic Documents, Inc.
Share this item