Othello. A Tragedy, with Prefatory Remarks. The Only Edition Existing, which is Faithfully Marked with the Stage Business, and Stage Directions, as it was Performed at the Theatres Royal. By W. Oxberry, Comedian. Boston: Published by Wells and Lilly and A. T. Goodrich & Co, New York, 1822 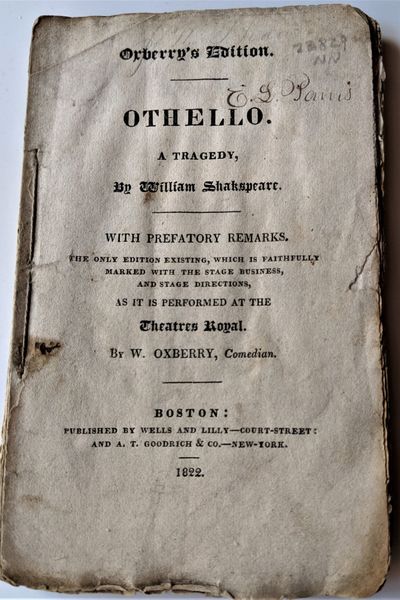 by Shakespeare, William
Boston and New York: Published by Wells and Lilly and A. T. Goodrich & Co, 1822. 12mo. 155 x 95 mm., [6 x 4 inches]. 108 pp. Small woodcut of the disposition of characters when the curtain falls. Stitched as issued; residue of paper wrappers on spine; edges uncut with a few tears, some natural soiling to title-page and in the text, otherwise a sound and attractive copy. First Oxberry edition. This publication is number 23 of Oxberry's New English Drama Series, published in England and America between 1818 and 1824. Oxberry's text of Othello is based on the prompt book produced for the 1818 production at Drury Lane. It includes a lists of players, descriptions of the costumes of worn by each player, and stage directions for the 1818 production. William Oxberry, Comedian was a devoted member of the London stage, whose career encompassed every aspect of the craft, from player, to stage hand, to manager, to director, to editor, and final to printer and publisher. He played West End theaters as well provincial stages around England. His reputation was that of a dedicated craftsman rather than that of a leading man and he earned the good will of the major players of the period and was an essential part of the London stage for almost thirty years. Shaw & Shoemaker, American Imprints, 10240. NCBEL, New Cambridge Bibliography of English Literature, III, pp. 583, 585. Oxford Dictionary of National Biography, https://doi.org/10.1093/ref:odnb/21045. (Inventory #: 483)
$100.00 add to cart Available from
De Simone Company
Share this item
De Simone Company, Booksellers
Offered by