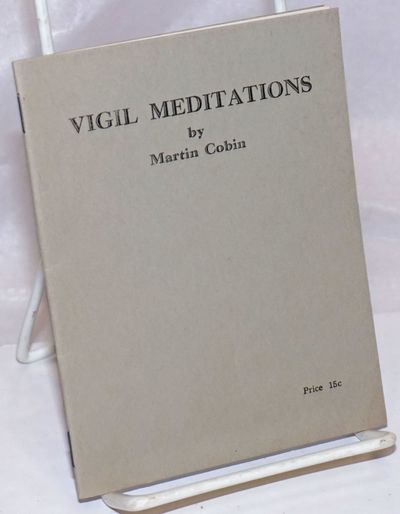 by Cobin, Martin
Dayton: Prepared for Dayton Regional Office American Friends Service Committee by The John Woolman Press, Inc, 1961. [16p] 4.25 x 5.5 inches, illus., very good first edition pamphlet in stapled gray wraps. "On Easter Week, March 26 to April 2, 1961, a silent 'Witness for Peace' was held in front of a U.S. Army Chemical Corps facility near Newport Indiana. During the week nearly 400 stood in protest to the war system, symbolized by the plant where it is believed a lethal gas is being produced. The following sonnets were composed by Martin Cobin while standing in the vigil line before the gas plant."-introduction. Only 1 in OCLC as of 4/2020. (Inventory #: 250715)
$20.00 add to cart or Buy Direct from Bolerium Books
Share this item