Debit and Credit; a novel 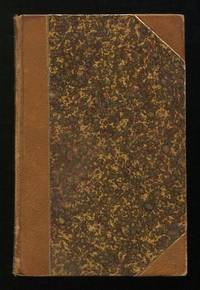 by Freytag, Gustav (translated by Mrs. [Georgina] Malcolm)
London/New York: Ward, Lock and Co.. Good+. (ca.1865). Later Printing. Hardcover. (half-bound, leather over marbled boards; no dust jacket) [moderate wear to edges and extremities, shallow dent in top edge of rear cover; small private library bookplate (Cary Library, Richfield Springs, N.Y.) on front pastedown, non-authorial gift inscription to "Edgar Cary" from "Judge Smith" dated 1891 on ffep; old bookseller's label (Brentano's, Union Square, New York) on rear pastedown]. English translation, "with the sanction of the author," of this German novelist and playwright's first novel, originally published in 1855 as "Soll und Haben." Highly regarded in its day, it was a paean to the German middle class that also incorporated some highly prejudicial attitudes towards Jews and (especially) Poles. The translator, Georgiana Charlotte Frances Harcourt, was the daughter of the Archbishop of York (and the wife of Major General George Alexander Malcolm), and is noted for her other translations of Freytag's works. NOTE that this copy lacks the additional 5 pages of advertisements at the end (present in the British Library copy), which were no doubt removed by the bookbinder. No date appears in the book, but I have adopted the "ca. 1865" date from the British Library catalogue record. . (Inventory #: 25398)
$100.00 add to cart Available from ReadInk
Share this item
ReadInk
Offered by