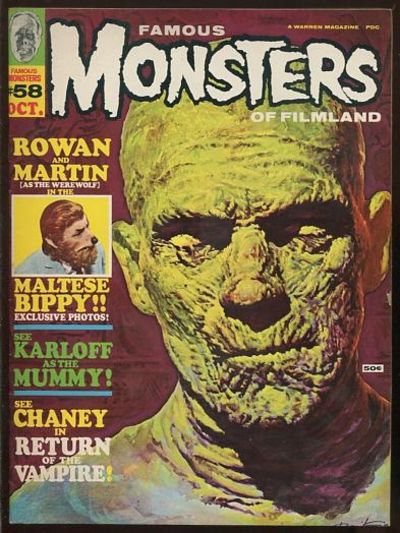 by (Ackerman, Forrest J, ed.)
New York: Warren Publishing Co.. Very Good+. 1969. (Issue 58). Magazine. [nice clean copy, minimal handling wear, tiny nick in right edge of front cover, some minor stress lines along spine]. (B&W photographs, ads) This issue includes: an account by editor FJA of his visit with Basil Rathbone on the set of Curtis Harrington's VOYAGE TO THE PREHISTORIC PLANET; a preview (with a full plot synopsis, lots of spoilers!) of DIE, MONSTER, DIE! (referred to by its working title, HOUSE AT THE END OF THE WORLD; this seems to be an article reprinted from an earlier issue, since the movie had been released four years earlier, and there's also no mention of Karloff having died earlier in 1969); a rundown of Lionel Atwill's film career, with emphasis on his various "mad doctor" roles, including a filmography; a 6-page comic-book-style version of THE MUMMY (1932), with no artist credited; a feature on RETURN OF THE VAMPIRE (1943), starring Bela Lugosi; a photo feature on the then-current Rowan & Martin comedy THE MALTESE BIPPY, in which Dick Martin played a werewolf; a brief feature on FRANKENSTEIN--1970. . (Inventory #: 25388)
$25.00 add to cart Available from ReadInk
Share this item
ReadInk
Offered by

The Awakening of Lesterville

Chicago Lawn IL : (Englewood Print Shop) , 1918
(click for more details about The Awakening of Lesterville)
View all from this seller>