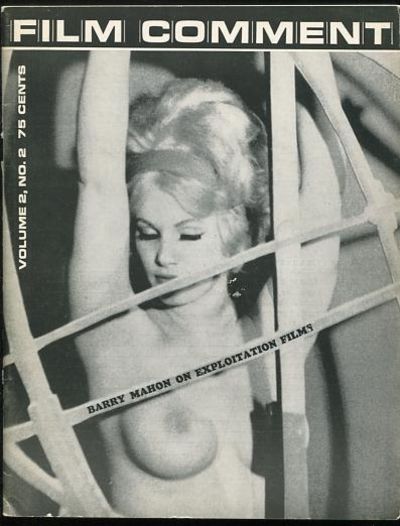 by (Hitchens, Gordon, ed.)
New York: Lorien Productions, Inc.. Very Good+. 1964. (Vol. 2, No. 2). Magazine. [light wear along spine and at spine ends, light soiling to rear cover adjacent to spine]. (B&W photographs) An uncommon early issue of this venerable critical/historical film journal, when it was much more politically-charged than in its later years. In this issue: an extensive interview with producer/director Barry Mahon, about exploitation films; an article, "Children's Films & Screen Education"; an interview with Albert and David Maysles, talking about their "Direct Cinema" aesthetic; two views on "Film in the Chinese People's Republic," one from the USIA, the other from a Chinese publication; a report from that year's Cannes Film Festival, by Max Weinberg; an interview with filmmaker Shirley Clarke (whose film THE COOL WORLD is also the subject of two reviews in this issue); an article about the "defunct film art" of the Benshi in Japanese cinema; an article on filmmaking in Bulgaria; a look at the Boston University film school. There are also brief reports from various film festivals, and a very interesting Letters to the Editor section, which includes letters from Ed Emshwiller, Stan Vanderbeek, Albert Maysles, and James Blue. ***NOTE that we have many more issues of this title (and other film magazines) in stock, and we welcome your inquiries. . (Inventory #: 25397)
$75.00 add to cart Available from ReadInk
Share this item
ReadInk
Offered by