An English and Hebrew grammar, being the first short rudiments of those two languages, taught together. To which is added, a synopsis of all the parts of learning 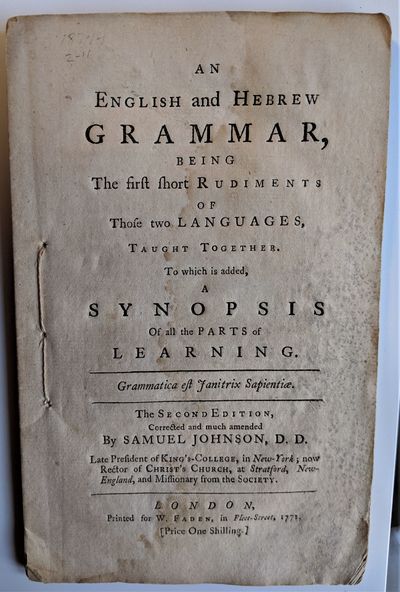 by Johnson, Samuel D. D.
London: Printed for W. Faden, 1771. 8vo. 200 x 125 mm., [8 x 5 inches. [2], iv, [2], 58 pp., plus [2] ads. Stitched as issued; wanting front blue paper wrapper, tide marks on title-page and lower wrapper, with some discoloration to the leaves. Otherwise a good, sound copy. First edition, The ironically named Samuel Johnson (not THE Samuel Johnson), was the first President of King's College in New York (later Columbia), and rector of Christ's Church, at Stratford, Connecticut. In 1743 he received an honorary Doctorate of divinity from Oxford, being only the third American to receive that honor. This grammar was his last of his many important works. Alston XIV, 194. (484). (Inventory #: 484)
$600.00 add to cart Available from
De Simone Company
Share this item
De Simone Company, Booksellers
Offered by