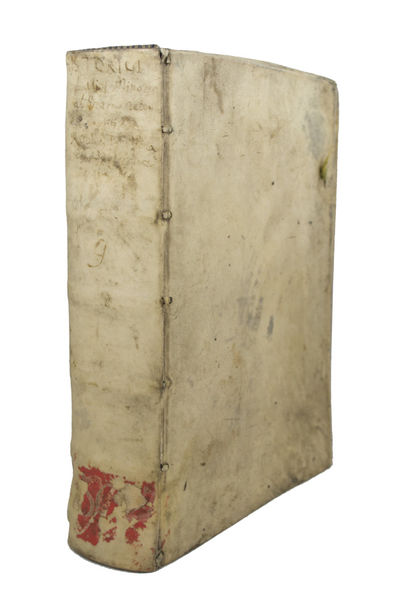 by COLUMBUS, Christopher
An Important Early Edition of Columbusís First Letter. The Original Printing of this Letter was the First Publication Concerning America [COLUMBUS, Christopher]. The Columbus Letter to Rafael Sanchez. [pages 116-121]. earliest printing in the sixteenth-century of Columbus's first letter. When this letter was first published in Barcelona, May, 1493 it was the first publication concerning America. [within] [ROBERTUS MONACHUS.] Bellvm Christianorvm Principvm, Praecipve Gallorvm, contra Saracenos, anno salutis M.LXXXVIII. pro terra sancta gestum: antore Roberto Monacho. Basel: Henricus Petrus, [1533]. Folio (11 1/8 x 7 7/16 inches; 283 x 188 mm). [8], 149, [1, colophon], [1, blank], [1, printer's device] pp. woodcut historiated initials. Final leaf with woodcut printer's device. This copy has the original genuine blank at a4 and has a correction which does not appear to have been noticed by any of the bibliographers. On p. 94, the bottom line of text is covered by a paste-over slip. This line properly belongs at the bottom of p. 98 and presumably it was decided that a paste-over was easier than a cancel. (Kraus) The fourth of the seven texts in this collection is a reprint of Columbus's letter to Rafael Sanchez in Cosco's Latin translation (pp. 116-121). "This is the edition from which most early writers quote" (Church). It is the earliest printing in the sixteenth-century of Columbus's first letter and the earliest printing that could be bought at a reasonable price. "After his first transatlantic voyage, Christopher Columbus sent an account of his encounters in the Americas to King Ferdinand and Queen Isabella of Spain. Several copies of his manuscript were made for court officials, and a transcription was published in April 1493. This Latin translation was published the same year. In reporting on his trip to his sovereigns, Columbus wrote: There I found very many islands, filled with innumerable people, and I have taken possession of them all for their Highnesses, done by proclamation and with the royal standard unfurled, and no opposition was offered to me." (Exploring the Early Americas, LOC) "This remarkable 16th-century compendium found its way to Providence because it contains a Latin translation of the initial report of Columbus on his first American voyage. But the book also presents a story of 700 years of struggle between Christianity and Islam. In particular, Robertus presents an account of the First Crusade, while Carolus Verardus offers a narrative of the expulsion of Muslims and Jews from Spain." (European Travelers in Islamic Lands, Brown University). Palau 271044. Sabin 72023. Harrisse 175. Adams R612; Alden 533/6; Church 66. [Bound After the following work in one folio volume]: [D. Erasmus Roterodamus], [Suetonius]. Ex recognitione Des. Erasmi Roterodami. C. Suetonius Tranquillus. Dion Cassius Nicaeus. Aelius Spartianus. Iulius Capitolinus. Aelius Lampridius. Vulcatius Gallicanus V.C. Trebellius Pollio. Flauius Vopiscus Syracusius : quibus adiuncti sunt, Sex. Aurelius Victor. Eutropius. Paulus Diaconus. Ammianus Marcellinus. Pomponius Laetus Ro. Io. Bap. Egnatius Venetus. Cologne: E. Cervicornus, April 1527. An early Cologne printing. Folio (11 1/8 x 7 7/16 inches; 283 x 188 mm). [48], 673 [i.e. 695], [1, blank] pp. Numerous errors in pagination, including p. 695 misnumbered 673. With large woodcut title border by A. Woensam von Worms displaying the feats of Hercules first used in 1524. Large woodcut initials. The collection contains a collection of biograhies of Roman emperors, Caesars and usurpers know as the Scriptores historias Augustae. The Scriptores edited by Erasmus first appeared in Basel in 1518. The selections from Dio Cassius are translated by Giorgio Merula. These two volumes bound together in full contemporary vellum. Yapp edges. Remnants of ties. Title in manuscript on spine. Orange ink spot on spine. No front free endpaper. Some worming to first 5 leaves of preliminaries (Erasmus) and approximately the final ten leaves (Monachas). Engraved title of the Erasmus with a very small, light stamp and a minor signature on bottom margin in old ink. No stamps found anywhere else throughout. Vellum a bit soiled. Some minor dampstaining occasionally throughout both volumes. Overall a very good copy of these interesting texts. Palau 271044. Sabin 72023. HBS 68298. $12,500 (Inventory #: 68298)
$12,500.00 add to cart Available from
Heritage Book Shop
Share this item