[Mutiny at Sea] Wonderful Providence, In Many Incidents at Sea An Engagement with a Pirate and a Mutiny at Sea, on Board Ship Ann, of Boston, Mass. Written by an Eye Witness and the Principal Actor in the Tragical Scene, Which he is at Any Time Ready and Willing to Qualify to. Published for the Benefit of our Inland 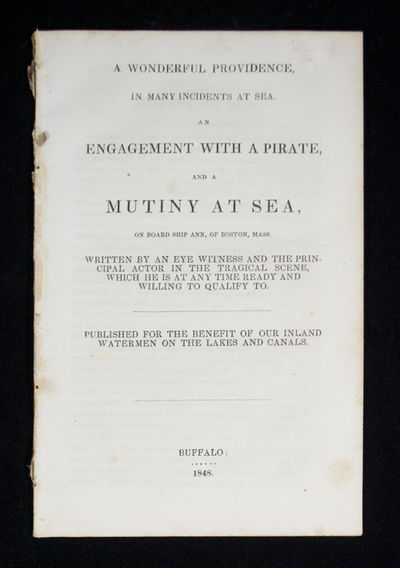 [Holcomb, Elijah]. A Wonderful Providence, In Many Incidents at Sea. An Engagement with a Pirate and a Mutiny at Sea, on Board Ship Ann, of Boston, Mass. Written by an Eye Witness and the Principal Actor in the Tragical Scene, Which he is at Any Time Ready and Willing to Qualify to. Published for the Benefit of our Inland Watermen on the Lakes and Canals. Buffalo, 1848.

Presumably first [earliest found and earliest attainable] edition of this work. Small octavo (7 ? x 4 ? inches; 185 x 120 mm). [1]-24 pp. This work and edition are very rare. We could find no copies of this at auction in over 50 years. OCLC list only two copies at New York Historical Society and the Rochester Museum. Sabin lists only the 8th edition of 1853. And only the 1849 printing is listed in McMurtrie, Additional Buffalo Imprints, number 213. So rare, that a facsimile reprint of what was thought to be the first edition, was in fact a reprint of the 1853 edition.

Disbound, but leaves held together. Some minor foxing, otherwise very good. The author Captain Elijah Holcomb writes, "The Primary object of my undertaking this laborious task, is the ameliorate the distress of a class of our citizens that has been neglected, and, as it were, trodden under foot, because they were sailors." This pamphlet is "A narrative [sic] of some of the most striking events of a seafareing[sic] life."

The pamphlet tells the story according to Captain Holcomb, that sometime before 1815, he captured six pirates at sea and held them in chains until they reached port. When they reached port, rather than subject them to prison, the captain decided to release the men because of the harsh life they had suffered at sea. The author states that this book was written to promote better conditions for sea men when they retire from a life at sea, and that they should not me subjected to the horrible living conditions in which they find themselves.

According to Holcomb "We have many salt-water sea men on our lakes, if their minds have been poisoned at sea by rebellious crew, the malady may be spread on the lakes and cause much suffering loss of lives and property. Sailor's boarding houses generally, are schools for every vice that can be thought of; we want a comfortable respectable place where they can board in private- where they can have the benefit of a school during winter months, to improve their minds and morals, and fit them for usefulness here below, and happiness beyond the grave. Citizens of Buffalo, you owe much to them, for through their instrumentality Buffalo has already become a populous and wealthy city, you need their services and without them business would take another course...One objective of this little pamphlet, is to open a way for their benefit, where they can have their effects safe, and feel that they are with friends..."