Annonces: An inquiry into the causes and effects of the variolae vaccinae. 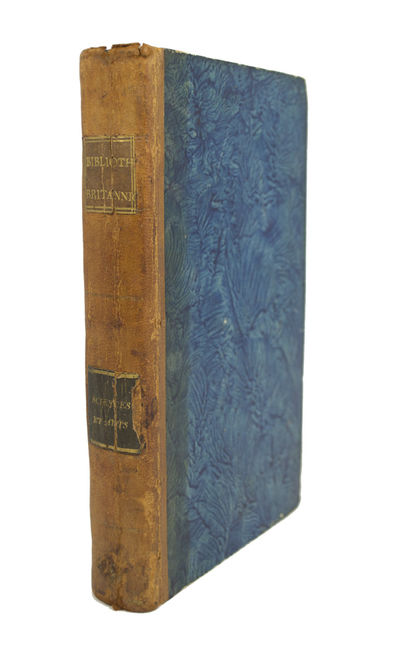 by JENNER, Edward
The First Announcement and First Almost Complete Translation in any Language on the Continent of Europe of Jenner's Discovery of the Small Pox Vaccine. Published the Same Year as the First Edition English Original. [JENNER, Edward]. [ODIER Louis]. Annonces: An inquiry into the causes and effects of the variolae vaccinae, etc. By Edward Jenner, M.D.F.R.S., etc. London 1798. Recherches sur les causes et les effects de la Petite-verole des vaches, par Ed. Jenner, Dr. M. Membre de la Societe Royale, etc. Londres 1798: [containing] [Annonces], premier extrait [and] second extrait. [Bound within] BibliothËque Britannique; ou Recueil Extrait des Ouvrages Anglais periodiques et autres; des Memoires et Transactions des Societes et Academies de la Grande-Bretagne, d'Asie, d'Afrique et d'Amerique; en Duex Series, intitulees: Litterature et Sciences et Arts, redige a Geneve, par une Societe de Gens de Lettres. Tome NeuviËme. Sciences et arts. Geneve: De l'Impr. de la Bibliotheque Britannique, 1798. The first announcement and first almost complete translation in any language on the continent of Europe of Jenner's Discovery on the Small Pox Vaccine. Published the same year as the first edition. Text in French, translated by Dr. Louis Odier. Jenner's announcement: pages 195-196. Jenner's extract part one: pages 258-284. Jenner's extract part two, 367-399. Octavo (7 ? x 4 ? inches; 196 x 121 mm). [1]-400 pp. This volume containing various other scientific studies as well is bound without four folding "meteorological observation tables" usually found in this volume (not related to the Jenner work). Jenner's discovery is ìone of the great triumphs in the history of medicineî (Garrison and Morton) and ìthe basis of the modern science of immunologyî (Printing and the Min of Man). We could find no copies of this at auction in over 50 years. Quarter calf over contemporary blue paste-paper boards. Spine with two leather spine labels, one brown, one black. Labels lettered in gilt All edges speckled blue. With original blue silk page marker. Overall a very good, internally clean volume. ìEdward Jenner, a pupil of John Hunter and a general practitioner in the small English country town of Berkeley in Gloucestershire, learned of an old west country tradition that milkmaids who had contracted cowpox, a mild infection caught from cattle, did not take smallpox. He decided to make an experiment, and on 14 May 1796 he injected cowpox lymph from an infected milkmaid into a country boy, James Phipps. On 1 July following he inoculated Phipps with the smallpox virus. No infection developed....At first Jenner's book was much criticized; its doctrine was too unfamiliar. Between 1799 and 1806 he issued five supplementary reports, and gradually his system was adopted, not only in England, but all over the world....by 1803 the book had been translated into Latin, French, German, Italian, Dutch and Portuguese and had been made known in America by Waterhouse....Jennerís work is the basis of the modern science of immunologyî (Printing and the Mind of Man). In 1798 he published this account of twenty-three successful vaccinations. In addition to the landmark discovery of the success of preventive inoculations against smallpox, the Inquiry was the first work to note the phenomenon of anaphlaxis or allergy. Within ten years of publication, Jenner was awarded 30,000 pounds by Parliament in acknowledgment of his great services. ìJenner started one of the greatest practical advances in preventive medicine and today there are inoculations...against scarlet fever, typhoid fever, diptheria, whooping-cough and tetanus, as well as...bubonic plague, cholera and yellow feverî (Printing and the Mind of Man). The success of Jennerís work led to the announcement of the World Health Organisation in 1980 that natural smallpox had been eradicated. "Whilst things were thus proceeding in England the knowledge of Dr. Jenner's surprising discovery was exciting the deepest interest wherever it was heard of on the Continent. The unhappy war which then rages prevented direct intercourse with France and many other parts. The 'Inquiry' nevertheless found its way, in the course of this year to Geneva, Hanover, and Vienna. I the first-mentioned place Drs. Odier and Peschier collected all the information that could be obtained on the subject and communicated it to the scientific world through the medium of BibliothÈque Britannique." (The Life of Edward Jenner M.D. By John Baron). Printing and the Mind of Man 250 (First edition). Garrison and Morton. Norman Library. HBS 68309. $3,500 (Inventory #: 68309)
$3,500.00 add to cart Available from
Heritage Book Shop
Share this item

Role of the Behavioral Scientist in the Civil Rights Movement

Lancaster PA : Lancaster Press , 1968
(click for more details about Role of the Behavioral Scientist in the Civil Rights Movement)

History of the Most Renowned Don Quixote of Mancha

London : Printed for Thomas Hodgkin and sold by William Whitwood , 1687
(click for more details about History of the Most Renowned Don Quixote of Mancha)
View all from this seller>