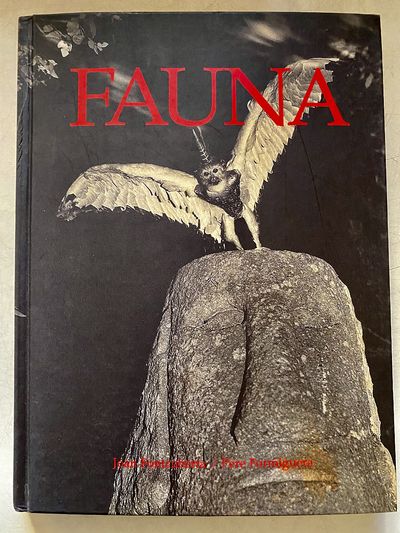 by Joan Fontcuberta, Pere Formiguera
Utrera/Seville: Photovision , 1999. Later printing. Hardcover. Fine. Fontcuberta is a conceptual artist whose best-known works, such as Fauna and Sputnik, examine the truthfulness of photography. In Fauna, , Fontcuberta created Fauna, also known as "Dr. Ameisenhaufen's Fauna" or "Secret Fauna", in collaboration with the writer and photographer Pere Formiguera, under the guise that Fontcuberta and Formiguera discovered the long-lost archives of German zoologist Dr. Peter Ameisenhaufen, born in 1895 and who disappeared mysteriously in 1955. Ameisenhaufen had catalogued a number of unusual animals; for example, Cercopithecus icarocornu resembles a monkey with a unicorn-like horn on its head and wings; and Solenoglypha polipodida resembles a snake with 12 feet.A review of the exhibition as presented in 1988 at the Museum of Modern Art noted that the evidence presented for the existence of the animals included "photographs... both in their natural habitats and in laboratory situations; detailed field notes, both in the original German and English translations; an occasional skeletal X-ray or dissection drawing; two or three tapes of the animals' cries, and in one case, an actual stuffed specimen.” Furthermore, a video displayed interviews in which various people discussed Ameisenhaufen's life, (Inventory #: 2192)
$200.00 add to cart Available from
Little Sages Books
Share this item