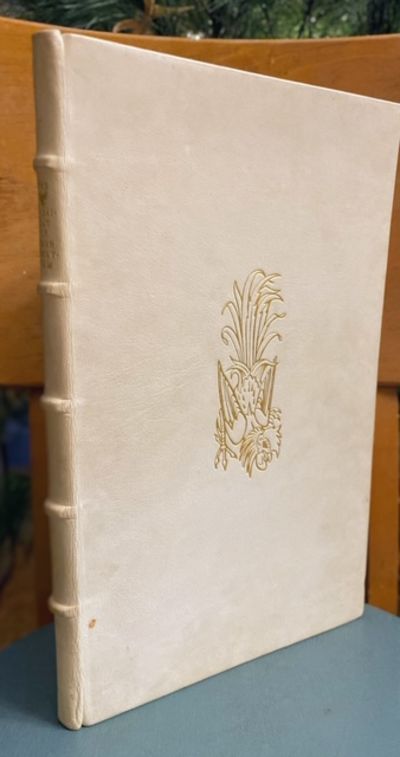 by Omar Khayyam; translated by Edward Fitzgerald
London: Golden Cockerel Press , 1938. Limited Edition. Leather bound. Very good. #27/30, a small folio in gilt-stamped white morocco, bound by Sangorski and Sutcliffe, top edge gilt. In an edition of 300 copies, this being one of only 30 so bound, as well as signed by Charles Ganze, Sir E. Denison Ross and artist John Buckland-Wright. This edition offers us the text of Fitzgerald's First Edition of his translation along with his monk-Latin version, here printed for the first time and accompanied by collotype facsimiles laid into a pocket at back. Additionally there are translations of the Latin and Persian orignals by Ross, and eight copper plate engravings by Buckland-Wright. This copy lacks the five extra engravings called for which would accompany the collotypes in pocket at rear. Leather shows bit of surface handling and one small brown spot, cleaning has not been attempted.

"This Edition has been printed by Christopher & Anthony Sandford and Owen Rutter at the Golden Cockerel Press, Rolls Passage, London, E.C.4, in Perpetua type on Golden Cockerel paper made by Arnold & Foster. Preparation of the edition was begun in October, 1936, and finished in August, 1938. Three hundred copies only have been printed and the type has been distributed. Nos. 1-30 are accompanied by 5 additional engravings (not present in this copy 11/300), and collotype facsimiles of FitzGerald's Monk-Latin ms. (Inventory #: 2183)
$2000.00 add to cart Available from
Little Sages Books
Share this item

A Sermon Delivered Before His Excellency Caleb Strong, Esq., Governor, The Honorable [The] Council, Senate and House of Representatives of the Commonwealth of Massachusetts May 26, 1802 being the day of General Election

Boston : Young and Minns, State Printers , 1802
(click for more details about A Sermon Delivered Before His Excellency Caleb Strong, Esq., Governor, The Honorable [The] Council, Senate and House of Representatives of the Commonwealth of Massachusetts May 26, 1802 being the day of General Election)
View all from this seller>