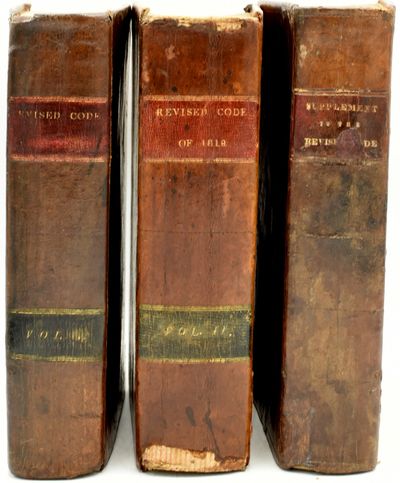 by [Benjamin Watkins Leigh; William W. Henning]
Richmond: Thomas Ritchie // Samuel Shepherd & Co, 1833. First Edition. Full Leather. Very Good binding. This set of the Revised Code of Virginia in 1819, accompanied by the Supplement of 1833; in contemporary legal calf with morocco spine label; expected light toning/foxing throughout. Volume I is lacking part of the front endpaper and has loss to the top corner of the pastedown; Volume II is lacking the front endpaper, and the last leaf of the Index; the Supplemental volume has the name of Wm. Brent Jr. of "Richland, near Aquia Virgina". ~The Code of 1819 was the first codification in Virginia that organized the statutory law by subject matter (previous Codes were organized by date of enactment). The conservative jurists of the Virginia Bar preferred the old tradition of dating public acts from the date of Independence. Leigh apologizes for the new practice of statutory organization, and includes the dates in the margins. Benjamin Watkins Lee, who was a member of the House of Delegates, was appointed superintendent of the publication, assisted by William Hening and William Munford. Interestingly, the Code mistakenly included the proposed Titles of Nobility Amendment to the United States Constitution as the Thirteenth Amendment (see Vol. I, p. 30). It was never ratified and its inclusion is an editorial error. After the insurrection led by Nat Turner in Southampton County, Virginia (and the largest number of white fatalities in one uprising in the antebellum South) state legislators throughout the South passed numerous laws restricting the rights of slaves and Free Negroes. The Virginia laws are found in this Supplement. This unfortunate legislation made it illegal to do such things as teach Negroes to read and write (chapter 186), and prescribed "death... without benefit of clergy" for any free Negro or mulatto who "do ravish a white woman" (chapter 180). There are a number of other most oppressive laws as well. Very Good binding. (Inventory #: 291311)
$500.00 add to cart or Buy Direct from
Black Swan Books
Share this item

[FLORIDA] THE WOMEN OF FLORIDA. VOLUME TWO. THE BIOGRAPHIES. [VOL. 2 ONLY OF 2 VOLUMES]

The Southern Historical Publishing Associates , 1940
(click for more details about [FLORIDA] THE WOMEN OF FLORIDA. VOLUME TWO. THE BIOGRAPHIES. [VOL. 2 ONLY OF 2 VOLUMES])

Baden : Lars Muller Publishers , 2001
(click for more details about [SIGNED] [GRAPHIC DESIGN] THIS WAY -- THAT WAY. PRINTS + POSTERS. RECOLLECTIONS OF WORK)
View all from this seller>