Office of the American Emigrant Company, New York, July 24th, 1862. Circular. For the Purpose of Answering the Numerous Inquiries Addressed to This Office, from Different Sections of Iowa... [caption title and first line of text] 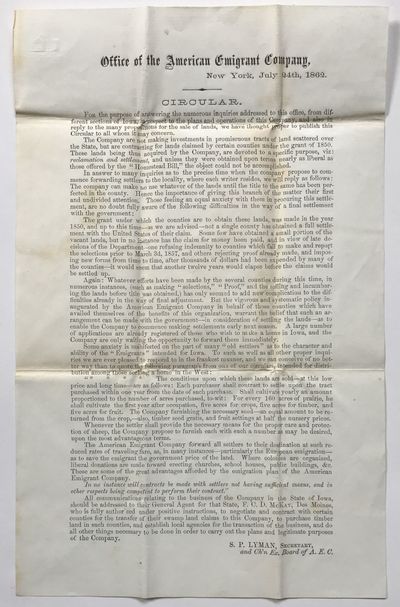 by [Iowa]. [Emigration]
New York, 1862. Very good.. Broadside, 12.5 x 8 inches. Previously folded. Light wear and scattered discoloration. An unrecorded 1862 circular from the American Emigrant Company intended to soothe jittery purchasers who had not yet received deeds to lands in Iowa or received instructions for travel and moving arrangements to their new homesteads. The company was established during the Civil War to entice European immigrants to the United States, particularly Germans and Scandinavians, westward with promises of land and employment. At the outset of their business, however, they apparently had difficulty in obtaining clear title to land that they had already offered, stating herein that: "The company can make no use whatever of the lands until the title to the same has been perfected in the county. Hence the importance of giving this branch of the matter their first and undivided attention.... A large number of applications are already registered of those who wish to make a home in Iowa, and the Company are only waiting the opportunity to forward them immediately." Another source of concern came from previous settlers of Iowa as to the desirability of the emigrants being offered land, to which this circular responded: "Some anxiety is manifested on the part of many 'old settlers' as to the character and ability of the 'Emigrants' intended for Iowa. To such as well as all other proper inquiries we are ever pleased to respond to in the frankest manner.... In no instance will contracts be made with settlers not having sufficient means, and in all other respects being competent to perform their contract." The American Emigrant Company proved to be quite a successful venture, and operated well into the late-19th century, but this circular provides evidence of its early difficulties. (Inventory #: 1107)
$375.00 add to cart Available from
McBride Rare Books
Share this item

[Alaska, Washington, and Yellowstone 1920
(click for more details about [Album of Seventy-nine Photographs of Yellowstone, Canada, Alaska, and Mount Rainier])
View all from this seller>