[Autograph Letter, Signed, on Pictorial Lettersheet with a View of Camp Benton in St. Louis] 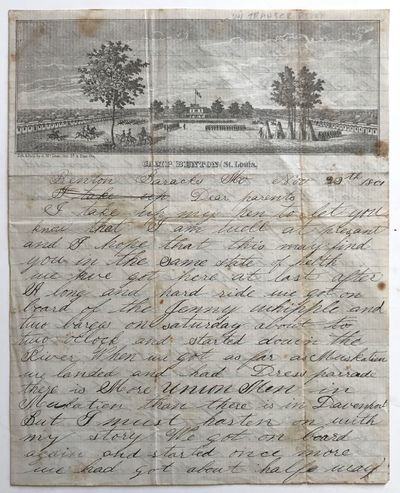 by Flory, Francis M.
[St. Louis]: Lith. & Publ. by A. McLean, 1861. [3]pp., on a bifolium. Previously folded. Light wear along old folds. Scattered light staining. In a neat, legible hand. In this letter, Francis Flory of the 11th Iowa Infantry details the difficult journey of his unit from Camp McClellan in Davenport to Camp Benton in St. Louis during November 1861. The letter, addressed to his parents in Mount Pleasant, Iowa, is written on a scarce pictorial lettersheet depicting Camp Benton, lithographed and published by Alexander McLean, a Scottish immigrant who published lithograph views, prints, and music in St. Louis during the 1850s and 1860s. The camp was established on the St. Louis Fairgrounds as a training barracks at the outset of the Civil War by John C. Frémont, and could house up to 30,000 Union troops. This view of the camp shows the long rows of barracks on either side of the parade grounds, with the house of the barracks commander at the center of the image and marching drills ongoing in the foreground. Flory's account of his voyage involved a crash of barges, several delays due to wind and fog, and finally a muddy march in the dark to Camp Benton from St. Louis, but upon his arrival he deems the barracks superior to his previous accommodations, writing that, "We have good quarters here better than we had in Camp Maleland [i.e., McClellan] we have good houses to kook [sic] and eat in." Flory was eventually killed in action at the Battle of Atlanta in 1864. We can locate no other copies of this scarce lettersheet. (Inventory #: 1318)
$475.00 add to cart Available from
McBride Rare Books
Share this item

Cincinnati : W.W. Pike , 1884
(click for more details about Hand Book of the Ohio and Tennessee River Packet Company [cover title])
View all from this seller>