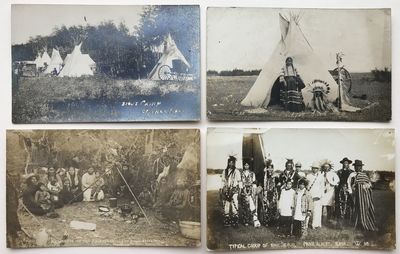 by [Native Americans]. [Canada]
[Various places in Saskatchewan, 1919. Very good.. Four real photo postcards. All captioned in the image, one unattributed. Light wear and soiling, two with messages on verso. Four striking real photo postcards of First Peoples in Saskatchewan, both Dakota and Cree, taken by four different photographers. Two of the images show the Wahpeton Reserve near Prince Albert, officially established in 1894, though the Dakota migrated north from the United States in the 1870s to escape the Indian Wars. Prince Albert is the third-largest city in the province, located at the same far-northern latitude as Edmonton. The four images are described below: "Sioux Camp / Prince Albert" by R.H. Turner of Prince Albert. A series of teepees set along a screen of trees in the middleground of the photo. On the right side, a couple stands smiling outside their home, their buggy nearby. Other individuals can be seen moving about the camp. "Typical Group of Sioux Indians, Prince Albert, Sask." by Waterworth Studio in Prince Albert. A posed group of twelve individuals -- all male, three of them children. All the men are posed in different forms of native costume -- several of them adorned with bells for dancing. The note on the verso is dated in pencil as 1919. "Cree Indians, Carlyle, Sask." This image shows a Cree couple in front of their teepee, which is centered in the photograph; a wagon peeks out from behind their home. Both are in traditional dress, the woman standing and the man seated wearing an elaborate feather headdress and holding upright a staff adorned with feathers. Carlyle is located in the southern portion of the province, about fifty miles from the North Dakota border. "Remnants of the Aborigines - City Studio, Saskatoon" postmarked 1908. This heart-wrenchingly titled image depicts a tribal group of twelve people -- mostly women and children -- seated around a cooking fire above which is hung a narrow metal pot. The trappings of camp life can be seen around the periphery of the image -- a pottery jug, a metal wash tub, met drying from branches, a blanket. Saskatoon is located about eighty miles southwest of Prince Albert. (Inventory #: 1348)
$500.00 add to cart Available from
McBride Rare Books
Share this item