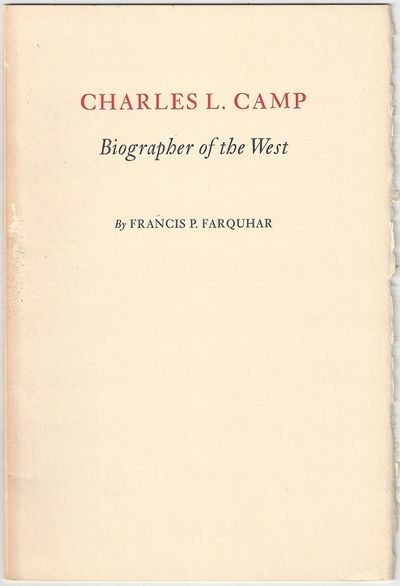 "Foremost of Dr. Camp's work in value to historians is 'The Plains and the Rockies,' cited throughout western historical writings today as 'Wagner-Camp. First published by Henry R. Wagner in 1920 (corrected in 1921), it needed to be overhauled and extended to provide for new material that had been brought to light. 'Fortunately,' wrote Mr. Wagner in 1935, 'just the right man to edit it is at hand. Mr. Charles L. Camp has agreed to undertake the task, make the corrections and additions and see the book through the press. This is a surprising stroke of fortune as no one of my friends is so well fitted to edit this book as Mr. Camp, versed as he is, not only in the history of epoch covered, but well acquainted with many of the books described.' Camp's visits to the bookstores in New York had indeed paid off. (Inventory #: 3881)
$15.00 add to cart Available from
Tschanz Rare Books
Share this item

Standard Guide Map of the State of Florida furnished by the Courtesy of the Jacksonville, Tampa and Key West System and East Coast Line

Buffalo, NY : Matthews-Northrup Company , 1891
(click for more details about Standard Guide Map of the State of Florida furnished by the Courtesy of the Jacksonville, Tampa and Key West System and East Coast Line)

A Winter at Fort George, Florida

[Fort George Island Syndicate] , 1886
(click for more details about A Winter at Fort George, Florida)
View all from this seller>