The Book of the Law of the Lord. Consisting of An Inspired Translation of some of the most Important Parts of the Law given to Moses, and a very few Additional Commandments, with Notes and References 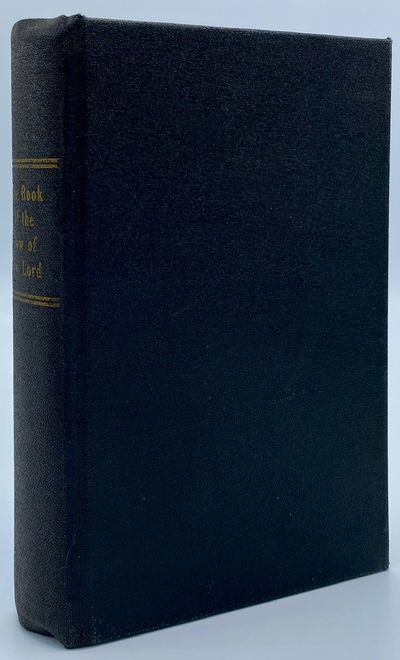 by Strang, James Jesse
Burlington, WI: The Voree Press, 1948. Second Edition. 336pp. Sextodecimo [15 cm] Black cloth with the title gilt stamped on the backstrip. Very good. Ownership marks in ink on the verso of the front free endsheet, white out at the foot of the title page. Otherwise clean. Strang, who was born in New York State in 1803, grew up a member of the Baptist Church, and among other things practiced law, served as postmaster, and owned and edited the 'Randolph Herald.' After his family had moved to Burlington, Wisconsin, in 1843, his brother-in-law, Moses Smith, an ardent Mormon, interested him in that sect. In February 1844 Strang made a trip to Nauvoo, Illinois, with Aaron Smith, and under the influence of Joseph and Hyrum Smith converted to Mormonism. On June 27, 1844, when Joseph Smith was killed by a mob at Carthage, Illinois, Strang claimed the leadership of the Mormon Church and with a group of followers, set up a church and printing press in Voree, Wisconsin, near Burlington. In 1847 he moved his church and press to Big Beaver Island in northern Lake Michigan and founded the city of Saint James. In 1850 Strang was crowned king of a 'kingdom' patterned on 'The Book of the Law of the Lord,' which he alleged was an ancient Mosaic document given him by divine power for translation. This work was begun in Strang's paper, 'The Northern Islander,' in January 24, 1856 issue. (Inventory #: 3883)
$150.00 add to cart Available from
Tschanz Rare Books
Share this item