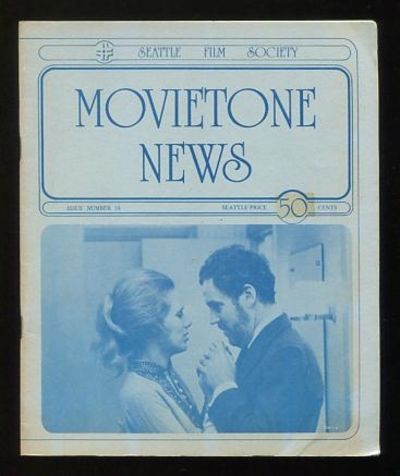 by Jameson, Richard T., ed.
Seattle: The Seattle Film Society. Near Fine. 1975. (No. 38). Stapled wraps. [minor soiling to rear cover, very slight bump/bend at upper right, faint stain from removed price sticker on front cover]. (B&W photographs) Features include: the regular contributors' always-provocative "Best Lists"for 1974; the editors' wonderful "Moments out of Time" feature for the previous year ("Scenes, shots, sensations, and ineffable slippings-away, remembered"); review/analysis of THE CEREMONY (Nagisa Oshima); an interview with Canadian author Mordecai Richler, specifically focusing on the film adaptation of his novel THE APPRENTICESHIP OF DUDDY KRAVITZ; reviews of THE SEDUCTION OF MIMI (Lina Wertmuller), JUGGERNAUT (Richard Lester), THE GAMBLER (Karel Reisz, written by James Toback), DON'T LOOK NOW (Nicolas Roeg), THE NIGHT PORTER (Liliana Cavani), others. ***NOTE that we have many more issues of this title (and other film magazines) in stock, and we welcome your inquiries. . (Inventory #: 25404)
$20.00 add to cart Available from ReadInk
Share this item
ReadInk
Offered by