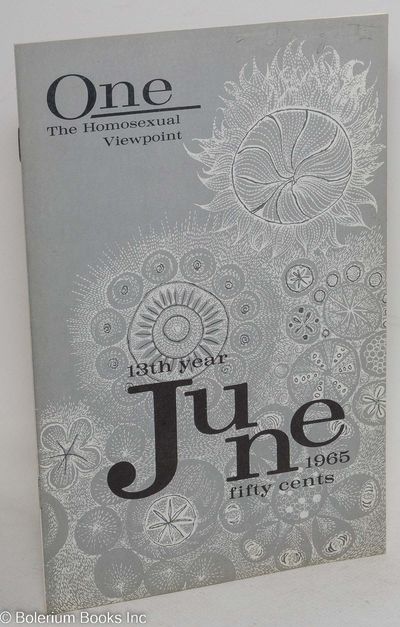 by Slater, Don, Robert Gregory, Joseph Hansen, et al, editors, James Colton aka Joseph Hansen, Marc daniel, Jane Race, et al.
Los Angeles: One, Inc, 1965. Magazine. 32p. including covers, 5.5x8.5 inches, very good digest size magazine in stapled pictorial wraps. Important issue in the history of the Corporation. Dorr Legg and Slater had a falling-out which resulted in a two-year court battle. This issue has an editorial by Slater calling for One to reach out to straight and lesbian readers. Eventually Dorr Legg et al retained the One, Inc. name and publishing rights while Slater retained the archive.

Also in this issue ashort story "Getting Rid of Mr. Granger" by Colton aka by Hansen. Hansen was involved in both issues.

One, Inc., which took its name from Thomas Carlyle's statement that "A mystic bond of brotherhood makes all men one," was founded in LA in 1952 as a homophile organization with connections to the Mattachine Society. As the first pro-gay journal of its kind, it serves as an important source for pre-Stonewall homophile studies. In 1954 the US Post Office declared it obscene, leading to a four-year legal battle (chronicled in its pages) that concluded with a favorable decision as part of Roth vs. United States. Aside from its articles covering topics ranging from the Beatniks and Gay marriage to homosexuality and national security, One Magazine also featured poetry and short fiction by numerous prominent authors. (Inventory #: 249970)
$95.00 add to cart or Buy Direct from Bolerium Books
Share this item