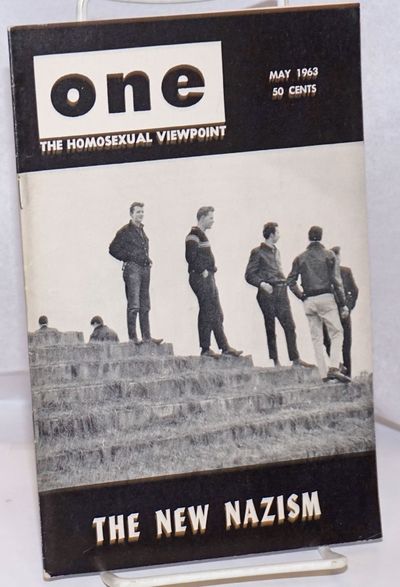 by Slater, Don, Richard Conger et al, editors, Marcel Martin, James F. Kearful, Bill Badger, Pierre Foreau, et al.
Los Angeles: One, Inc, 1963. Magazine. 32p. includes covers, 5.5x8.5 inches, fiction, articles, poetry, services etc., very good digest size homophile magazine in stapled pictorial wraps. Cover story "The New Nazism" by Kearful about the growing tide of fascism amongst the police and the church and the persecution of homosexuals in NYC & Miami One, Inc., which took its name from Thomas Carlyle's statement that "A mystic bond of brotherhood makes all men one," was founded in LA in 1952 as a homophile organization with connections to the Mattachine Society. As the first pro-gay journal of its kind, it serves as an important source for pre-Stonewall homophile studies. In 1954 the US Post Office declared it obscene, leading to a four-year legal battle (chronicled in its pages) that concluded with a favorable decision as part of Roth vs. United States. Aside from its articles covering topics ranging from the Beatniks and Gay marriage to homosexuality and national security, One Magazine also featured poetry and short fiction by numerous prominent authors. (Inventory #: 249715)
$65.00 add to cart or Buy Direct from Bolerium Books
Share this item