An Archive of Ephemera of the Rowley Brothers Wholesale Stationers 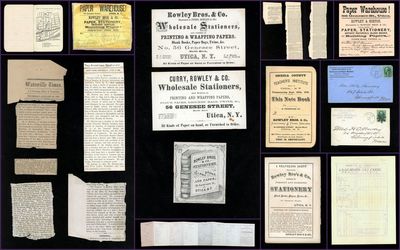 by H. C. Rowley and W. C. Rowley
Utica, NY, 1898. General wear. Irregular margin on back page of catalogue. Newspaper clippings have small holes where they were pinned together. Crease marks at folds. Some pieces show evidence of glue.. A small business archive consisting of seventeen (17) pieces of ephemera relating to the Rowley Brothers Stationary Business in Utica, NY, which date from circa 1866 to 1898. The pieces in the collection take one through the various incarnations of the business. The Rowley brothers, H. C. Rowley and W. C. Rowley first went into business in 1866 with their maternal uncle, Orrin Curry (1816-1915), under the name Curry, Rowley & Co. By 1869, their uncle would remove himself from the business, and it would be known as Rowley Bros. & Co. In 1879, when H. C. Rowley moved to Springfield, MA to join in business with the Merriam family, of Merriam-Webster Dictionaries fame, W. C. Rowley would remain in Utica, and the business would continue under the Rowley & Horton, due to a new business partner by the name of George Calvin Horton (1843-1898).

The archive includes two business cards; Rowley Bros. & Co. and Curry, Rowley & Co., two business envelopes, mimeographed price list with card sizes, one book seller label, 16 pp. concertina fold traveling agent's catalogue, one blank notebook which covers advertise the business, and six newspaper clippings regarding the business and two (2) advertising labels; Rowley Bros. & Co. and Rowley & Horton. The catalogue lists materials such as writing papers, blank books, inks, pens, and tin ware, along with their prices. The book seller label has an illustration of a hard bound book with the store's name on it. The blank book is of note, as it actually contains an error. The printed covers have been attached upside down to the blank interior pages. The newspaper articles cover a variety of subjects such as a thwarted break in at the store in 1877, the announcement of H. C. Rowley leaving the business to go into business with the Merriam family in 1879, a notice of support for A. B. Ballou an employee of Rowley & Horton running for county clerk, and the obituary of G. C. Horton. Measures 28" x 5 1/2" (largest, advertising booklet unfolded), 2 3/4" x 2 3/8" (book seller label). Warren Curry Rowley (1841-1928) and Hiram Curtis Rowley (1844-?) where born in South Trenton, NY to Warren Dunham Rowley (1800-1854) and Harriet Maria Curry (1818-1889). The two brothers had several other siblings: Nancy Helen Rowley (1846-1925), Sarah Cornelia Rowley (1850-1952), Harriet Sophia Rowley (1853-?), and a half sister, Nancy Davis Rowley (1837-1846). Both brothers would move to Utica, NY and enter into business with each other in 1866, along with their maternal uncle, Orrin Curry (1816-1915. W. C. Rowley would marry Julia Adella Waite (1848-1923) in 1871. Together they would have two children, Edith Adella Rowley (1873-1919) and Henry Waite Rowley (1879-1971). He would die on May 4, 1928 in Manhattan, NY. H. C. Rowley would marry Thirza Jane Merriam (1845-1919) on December 2, 1874. He would move in Springfield, MA in or around 1879 to join in business with the Merriam family, of Merriam-Webster Dictionaries. He and Thirza had two children: Harold Merriam Rowley (1879-?) and Arthur Merriam Rowley (1883-1979). H. C. Rowley would die on December 14, 1922 in Springfield, MA. (Inventory #: 29005815)
$325.00 add to cart or Buy Direct from Eclectibles
Share this item