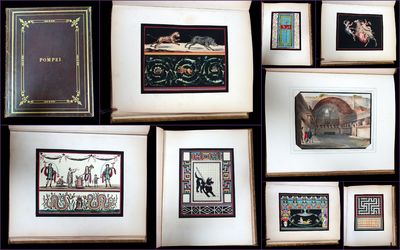 by L. Majolino
1891. General wear. . A souvenir album of Pompeii, featuring 15 hand finished Pochoir illustrations and one water color paintings of the frescos or tiling found in the ruins of Pompeii. The illustrations feature a variety of Roman and Greek Mythology and culture, such as Poseidon riding in his chariot, peacocks and sea serpents. There are several geometric images in the album as well that are most likely the tile flooring found in some of the villas. One of the more interesting tile work recreations in the album is entitled "Cave Canem" which Latin for "Beware of the Dog". This particular pochoir is actually of a piece of tile work found on the floor at an entrance to a villa in Pompeii depicting an attacking large black dog. The water color is not a recreation of a fresco or tile work, but rather an illustration of the bath house in Pompeii. Both the water color and the last engraving in the album appear to have been added in at a later date due to a change in the paper. With the exemption of those to images, all have an embossed caption, "Pompeii, L. Majolino in Napori [Naples]". On the back of some of the illustrations, is a similar caption, but written in pencil with the date. Majolino was one of the first people to sell photographs of Pompeii. It is most likely these engravings were done from his photographs. The illustrations are contained in a brown leather album with gilt decorative elements on the covers, as well as gilt edged interior pages. One of the images in the book is a duplicate. Measures 12 1/2" x 10"To view the item, please click on the following link:https://photos.app.goo.gl/omkoxizo3UePyPnJ9 (Inventory #: 29012589)
$2,500.00 add to cart or Buy Direct from Eclectibles
Share this item