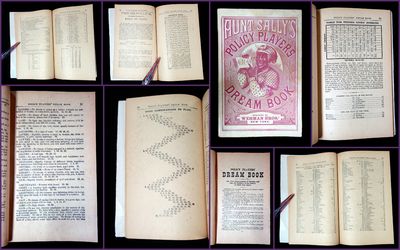 New York, NY: Wehman Brothers, [1920]. General wear. . 122pp. Pictorial wraps. A book that allows the reader, not only to interpret the meaning of their dreams, but also use their dreams to picking winning numbers in the game of policy. Policy was an illegal gambling game, similar to the lotto, mostly played by the poor or in working class neighborhoods. On the cover of the book is an image of an older African American woman holding a sign with the numbers 4,11,44. This series of numbers was known as the "washerwoman's gig", and was a stereotypical bet by poor, male, African Americans. The book lists a variety of subjects, objects, or events that one might dream about, their meaning, and the numbers one should play if you dream it. For example: "Inquest - To dream that you are present at a coroner' inquest is a bad sign; you will soon squander your fortune. 47.", "Nightingale - Light amours; to hear it song, happiness. 10.", and "Stirrup - Signifies a journey. 47." On some pages, the book doesn't list the meaning of a symbol, but rather just the numbers associated with them. Also included in the book as a copy of the Oraculum, a 'book of fate' supposed carried by Napoleon. Measures 7 1/4" x 4 3/4" (Inventory #: 20202459)
$250.00 add to cart or Buy Direct from Eclectibles
Share this item