Photograph of Group of Men in Costume, Surrounding the Parade Wagon of E. A. Bloser Wholesale & Retail Jeweler 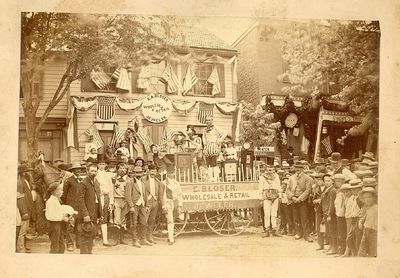 Newville, PA: Elias Alexander Bloser, [1890]. General wear. . A black and white photograph of a large group of mostly men and young boys standing in front of E. A. Bloser Wholesale and Retail Jeweler store. In the center is a wagon with the stores name in front, with men in bizarre costumes standing around and on the wagon. One of the costumes appears to be a dog face. The wagon also appears to be carrying various small grandfather clocks. There numerous flag and other patriotic decoration on both Bloser's store front and that of Swope's Drugs next store. While this photograph was most likely taken during a parade, It is unknown exactly which holiday the parade was celebrating. The photograph has been dated to circa as E. A. Bloser founded his store in 1873 in Boserville, PA before moving his store from Newville, PA, where this photograph was taken. In 1892, Bloser again move his store to New Keningston, PA. As Bloser was involved in a number of fraternal orders - Free and Accepted Masons, the Patriotic Order Sons of America, the Knights of Malta, and the Local Encampment of the Independent Order of Odd Fellow- and the photograph mainly depicts men, it is possible that the photograph is of one of these fraternal orders. The photograph itself is mounted on white card. Measures 8"x 5 1/2" (photograph), 10" x 8" (board)