The Works. [Including Plain Tales from the Hills; The Phantom Rickshaw; The Light That Failed; Gunga Din; The Jungle Book; The Second Jungle Book; Captains Courageous; Kim; Just So Stories.] 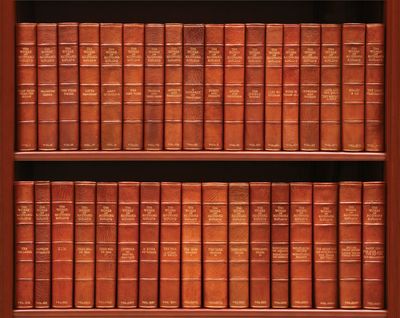 Limited edition of 525 sets of which 500, signed by the author, were for sale. However many of these were destroyed when the publisher's warehouse was bombed in 1941.

The Sussex Edition, number 101 of a limited edition of 525 sets signed by the author on the limitation leaf of vol. I. In his last years and with his health failing, Kipling continued the gathering-up of existing material that resulted in the great retrospective work... the Sussex Edition of his works, undertaken by Macmillan as a monument to one of the firms most profitable authors. The idea for the edition went back to 1928 and work was begun by 1930. The selection, fuller than that of any other edition, was the work of Kipling, and he saw the proofs of at least 21 of the editions 35 volumes before his death. Set in Bembo type on hand-made paper, bound in Nigerian goatskin, and limited to 525 sets, the Sussex Edition did not begin publication until 1937; sales were slow in those depression years, and a large number of the unbound sheets lying in a London warehouse was destroyed by German bombs. One result of this exaggerated scarcity is that the Sussex Edition is now among the most prized and most expensive of all modern editions (ibid., Vol. 6: 1931-36, 2004, p. 231). Though the edition was published posthumously, Kipling had signed the limitation sheets prior to his death on 18 January 1936. A very attractive set of this superb edition.