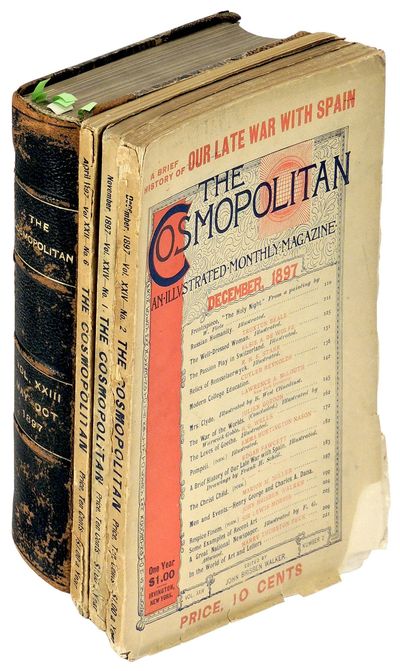 by [Wells, H.G.; Illustrated by Warwick Goble]
Irvington-on-the-Hudson, NY: Cosmopolitan Press, 1898. Hardcover. Very Good+. Hardcover. Scarce. The first appearance of Wells's famous science fiction novel, The War of the Worlds, was its serial publication in 1897-1898 in Cosmopolitan magazine in the United States and in 1897 in Pearson's in England. The first hardcover book was published in 1898 by William Heinemann in the United Kingdom. The novel about a war between earth and extraterrestrials from Mars was a popular hit and has never been out of print. The book was serialized in nine parts. Part I appeared in Volume XXII in April 1897. Parts II-VII appeared from May to October 1897 in Volume XXIII. The last two parts appeared in November and December in Volume XXIV. Each installment was accompanied by several black and white illustrations by Warwick Goble, an English illustrator who became well known for his illustrations for children's books. However, Wells did not like the illustrations he did for these serial installments. Also included within these volumes are stories about current events happening at the time as well as additional pieces of literature by other authors. Included in this collection are three individual Cosmopolitan issues in the original paper wrappers as well as one bound complete volume of six issues. The three issues in original wrappers (Vol. XII: No. 6, Vol XXIV, Nos 1 and 2) are all in very good condition with chipping and wear to the edges of wrappers and spines. Browning to margins of wrappers, occasional spots of soiling and smudge marks to interiors, and occasional small closed tears to pages. The bulk of the issues are contained in a bound collection of six issues from Volume XIII (Nos 1 - 6). This volume is bound in three quarter dark brown leather over marbled paper covered boards. The leather is heavily worn and chipped with both hinges cracked. Rubbing and wear to boards. Occasional smudge marks to margins but clean and bright overall. ALL 22 chapters of War of the Worlds are included in this collection of issues. LIT/041620. (Inventory #: 33984)
$700.00 add to cart or Buy Direct from
Kelmscott Bookshop
Share this item

A View of Society and Manners in Italy: With Anecdotes Relating to Some Eminent Characters Two Volumes

London : W. Strahan and T. Cadell , 1781
(click for more details about A View of Society and Manners in Italy: With Anecdotes Relating to Some Eminent Characters Two Volumes)
View all from this seller>