Austin Texas as a Health and Winter Resort. Compliments of the Driskill Hotel [cover title] 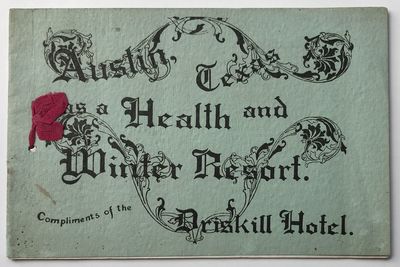 by [Texas]. [Promotional Literature]
Austin: S.B. Hill, 1903. Very good.. [20]pp. Oblong 12mo. Original printed wrappers, string tied. Light soiling and wear to wraps; small patch of worming to lower edge of wear wrapper. Contemporary ink annotation at top edge of initial leaf. Minor toning and dust soiling. Scarce promotional for the city of Austin as a health oasis and winter getaway at the beginning of the 20th century, produced for distribution by the capital city's famed Driskill Hotel. The introductory text hails Austin as a city without disease, and boasts that any introduced illness "would die out for the lack of congenial material to sustain it," owing to its ideal location and perfect climate. Among the other benefits of the city touted within are its educational opportunities, with a dedicated description of St. Edward's College, its cultural offerings, and of course, the Driskill, "one of the most palatial and imposing buildings of the South," with its own artesian well, and "the only hotel in Austin having elevators, its own electric light, cold storage and steam laundry plants, and private wire connecting with the different telegraph and telephone companies." The work is illustrated with five photographic images of the hotel and its interior, and well as several others depicting scenes around Austin and its architectural points of interest. We locate only two copies, at Baylor and the Austin Public Library. (Inventory #: 1236)
$600.00 add to cart Available from
McBride Rare Books
Share this item

Tacoma : October , 1926
(click for more details about Permanent Residence? The Tacoma Japanese Times)
View all from this seller>