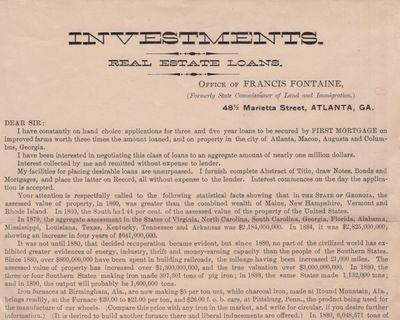 by [Francis Fontaine]
Atlanta: Jas. P. Harrison and Co. Printers, Atlanta, Ga, 1890. Original. Broadside. Very good. Broadside. Approx. 15.5" x 8.5". 3 visible light folds. Light wear to the paper. Very good. Francis Fontaine is seeking investors (preferably native born Georgians) for his real estate business. In the opening remarks Fontaine asserts - "I have constantly on hand choice applications for three and five year loans secured by FIRST MORTGAGE on improved farms worth three times the amount loaned, and on property in the city of Atlanta, Macon, Augusta and Columbus, Georgia. Fontaine cites data and growth in iron furnaces, cotton mills, agricultural production, and increasing property values in the South as reasons to invest. Fontaine states towards the end of his advertisement - "Georgia is one of the original thirteen colonies of Great Britain, and no State in the union has a more civilized or a more peaceful and industries population, who are as much attached to their homes as New Englanders are. There are no race conflicts in Georgia, and the former Slaves and their children are rapidly accumulating property... I deal directory with the investor, pay no large salaries, or high rents, and hence am contented with small commissions, which companies having expensive offices cannot afford to accept; and believe it to be safer to lend to native Americans who have lived in Georgia for generations, then to lend to foreign-born new settlers in the west." The broadside is undated in the title or by the printer but in the body of the text is a statement - "In 1880, the three of four Southern States making iron made 397,301 tons of pig iron, in 1888, the same States made 1,132,000 tons; and in 1890 the output will probably be 1,600,000 tons." From wikipedia:

Francis Fontaine (1845-1901) was an American Confederate soldier, plantation owner, newspaper editor, poet and novelist from the state of Georgia.

After the war, Fontaine inherited his father's plantations and managed them, becoming a planter in his own right.[3][4][5]
In 1874, Fontaine co-founded The Columbus Times, a newspaper in his hometown of Columbus, Georgia. He then served as a state diplomat, encouraging European immigration to the state of Georgia.[3] In 1877, he was elected to a convention to write the new state constitution.[5]
In 1878, his poem entitled The Exile: A Tale of St. Augustine was published by G.P. Putnam's Sons. The theme of the poem was the massacre of Huguenots by Spanish forces in Florida in 1565. The poem received negative reviews from The New York Times and the Evening Post. He went on to publish three novels, including Etowah: A Romance of the Confederacy, which received good reviews from critics.[3][4][5]. (Inventory #: 19312)
$250.00 add to cart or Buy Direct from Americana Books
Share this item

The Elements of Experimental Chemistry

Philadelphia : James Webster , 1817
(click for more details about The Elements of Experimental Chemistry)

Greater Britain: A Record of Travel in English Speaking Countries During 1866 and 1867

London : Macmillan , 1870
(click for more details about Greater Britain: A Record of Travel in English Speaking Countries During 1866 and 1867)
View all from this seller>