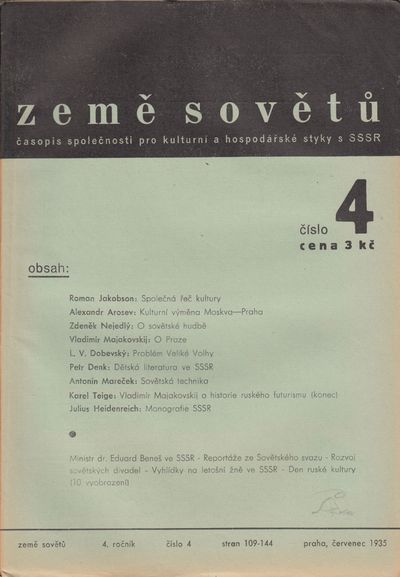 by Teige, Karel, editor
Prague, 1935-1936. Large octavos (26 × 18 cm). Original decorative wrappers; ca. 32 to 36 pp. per issue. Illustrated section on better stock at center of each issue. About very good; small nicks to overlapping wrapper edges. A complete yearly run of this highly interesting journal dedicated to fostering closer economical and cultural ties between the Czechoslovak Republic and Soviet Russia. It superseded the earlier journal "Nove Rusko" (1925-1929) and, after this volume, was continued as "Praha-Moskva." Contains contributions by a range of left-leaning Czech writers and journalists on topics ranging from the Soviet economy, geology, law, family life and literature, paying testimony to the immense interest in and sympathy for Soviet culture in 1930s Czechoslovakia. Among the contributors are Karel Teige (writing on Mayakovsky, among other things), Roman Jakobson, Zdeněk Nejedlý, Vladimir Mayakovsky, Julius Heidenreich, Petr Denk (on Soviet children's literature), Jindřich Honzl, Jiří Weil, Lubomír Linhart, Václav Běhounek, S. Lukianov, and many others. Each issue contains a section of black-and-white images on better stock at the center. Scarce in the trade unbound and in the original wrappers, which may have been designed by Teige.

As of April 2020, KVK and OCLC show four holdings in North America, although in two cases it is not clear whether the present volume is included. (Inventory #: 50651)
$750.00 add to cart or Buy Direct from
Bernett Penka Rare Books
Share this item