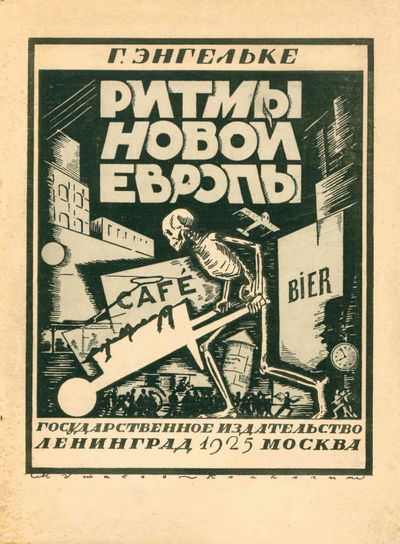 by Engelke, Gerrit (G. Engel'ke), Vladimir Piast, translator, and M. Ushakov-Poskochin
Moscow-Leningrad: Gosudarstvennoe izdatel'stvo, 1925. Small octavo (17.5 × 13 cm). Original pictorial wrappers by M. Ushakov-Poskochin; 93, [2] pp. About very good. Russian translation of the first and only collection of poems by the German worker poet Gerrit Engelke (1890-1918), who had published a few poems in journals before his early death in battle. The present work was originally published as "Rhythmus des neuen Europa" in 1921, and has been translated by Vladimir Piast (1886-1940), the Russian Symbolist poet, literary critic, and a close friend of Aleksandr Blok's. With a striking wrapper design by Maksim Ushakov-Poskochin (1893-1943), a gifted and versatile Soviet poster, book, and set designer who was arrested on false conspiratorial charges in 1941 and perished in a Gulag. The front wrapper shows a skeleton pushing a wheelbarrow full of dead bodies, against a gloomy cityscape full of beer halls and airplanes.

As of April 2020, KVK and OCLC only show two copies, at Staatsbibliothek zu Berlin and National Library of Israel. (Inventory #: 50692)
$450.00 add to cart or Buy Direct from
Bernett Penka Rare Books
Share this item