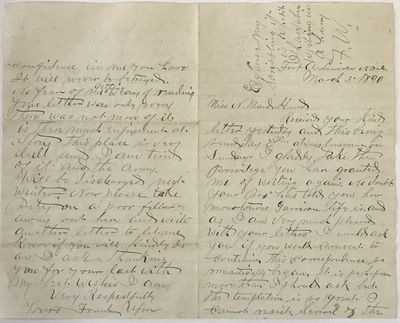 by Ufer, Frank
[Various places in North Dakota]: March - October, 1890. Very good.. Nine letters totaling 40pp. Octavo and quarto sheets. Old folds, light wear and soiling, one letter with moderate wear and some slight loss. A series of letters written by soldier Frank Ufer to Miss Maud Hurd of Alton, New Hampshire, while Ufer was stationed at several Army posts in North Dakota. Maud had corresponded with at least one other soldier on the frontier, Tom Logan, and her brother seems to have been in the army out west which is likely her connection to her current pen pal. Frank writes in his opening missive, "No doubt your Bro: has told you how monotonous garrison life is and as I am very much pleased with your letters, I would ask you if you would consent to continuing this correspondence so romantically began."

Apparently Maud does consent, because Frank's letters continue, addressing in her in warm tones and endearments. He asks Maud for a photo, which she sends. Frank describes himself, his family background, and provides some personal history in a lengthy letter dated March 15th. He writes that he started in business with his father at age nineteen, but being young and foolish sold out his share and went west. "I was discontented, restless and dissatisfied. First went to Cheyenne, Wyoming tery. to Nebraska, Iowa, Utah, Colorado, New Mexico, Old Mexico, Texas, Kansas, Indian tery. Arizona tery. then to Fort Leavenworth, Kansas and enlisted in the army after being thoroughly disgusted with myself and all mankind. ... You no doubt think the army a strange place for a discontented man. I can only say this I did not stop to consider what the army was and did not care but I resolved that I would make a man of myself and stay my five years and break myself of that restless desire." He will be twenty-seven when his term with the army is finished, and he is eager to make a good impression on Maud.

Maud had previously pursued a correspondence with another soldier, Tom Logan, who is known to Frank. Frank drops little disparagements about Tom Logan throughout his letters, assuring Maud he is a far more upstanding and proper gentleman. Regarding her correspondence with Tom, Frank writes to her: "Maud perhaps I can sympathize with you in perhaps loosing the man you once loved. Don't you know we all have our little love affairs therefore you must forget such things. It may perhaps be for the best but I cannot help but say you are right in expressing your contempt for a man who will willingly and deliberately gain any woman's love for the purpose of accomplishing their ruin."

Most of Frank's letters are filled with personal details and professions of admiration, but he occasionally drops in small pieces of life on the frontier. In one of his early letters, he writes, "...I must say the army consists of better men than it did in your bros. time. No doubt a great many men disgraced themselves while among the Indian maidens in the Indian tery. and L[ogan] was none too good to fall from grace." In a later letter he says, "We had a snow fall of about six inches on May 5 and overcoats are in demand daily, there is a cold north wind blowing and has been nearly all month." He is delayed in writing to Maud, and she fears neglect. He reassures her that he has only been busy with work and army business:

"I was first out to Fort Snelling, Minn. then to Camp Douglas, Wis. on the Rifle Competitions. From there I was ordered up to Turtle Mountains just on the border of this state & N.W.T. could not get any mail there only scouts and during this time 'I' Company was disbanded... Don't know how long I will remain here. This is a terrible desolate place situated on Devils Lake and I must say it is the devils own lake. The waters are always wild and restless quite a number of persons have been drowned in it. Indians will not venture on the lake for love or money they claim it is ruled by evil spirits."

In his final letter, he mentions going to Peru to seek his fortune, and one can't imagine this is a situation of which Maud approves. "...time will tell but I think there is a fortune in that country for some one and why not for me. I want to go, it won't be any expense to me and after thinking it all over there would be no danger only from the natives they are very treacherous but think they can be managed...." An intriguing turn of events, this strange twist leaves one wondering what happened next. It would seem, however, that Frank did not travel to Peru, as an obituary states that in the early '90s he built the first cross-country telephone line across the state of West Virginia -- a far cry from South America. The obit also lists his widow as a woman by the name of Hazel, so it seems Maud struck out yet again with an admiring soldier. (Inventory #: 1191)
$1,000.00 add to cart Available from
McBride Rare Books
Share this item