An Appeal to the Women of the United States 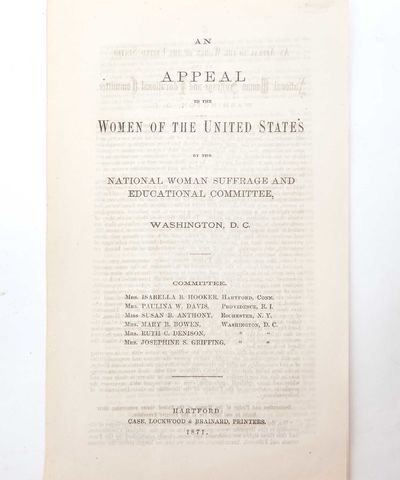 Scarce first edition of this foundational document in American women's history, released only one year before Susan B. Anthony's infamous arrest for casting a ballot in a U.S. Presidential election. Outlining the National Woman Suffrage Association's new strategy that emerged out of the 1871 Woman Suffrage Convention, An Appeal urged suffragists to assert an existing Constitutional right to vote under Amendments 14 and 15. And, as Anthony would do the following year, the document encouraged activists to exercise that right to vote and then sue in federal court if and when they were barred.

An Appeal articulated both the philosophical and practical importance of this new strategy, claiming "this is pre-eminently the birth-day of womanhood. The material has long held in bondage the spiritual; henceforth to two...are to walk hand in hand for the moral regeneration of mankind." If women under the spirit of the law could be held accountable for criminal acts, could be taxed, or could be charged with child-rearing, then it followed that they should shape the letter of those laws materially affecting their daily lives. Issuing its rallying cry, the Committee appealed that "the women of this country who are willing to unite with us in securing the full recognition of our rights" should sign the Declaration and Pledge of the Women of the United States concerning their Right to and their Use of the Elective Franchise. In doing so, these women would make a step toward equality not only for themselves, but for future generations: "our children's children will with fond veneration recognize in this act our devotion to the great doctrines of liberty in their new and wider spiritual application, even as we regard with reverence the prophetic utterances of the Fathers of the Republic in their Declaration of Independence." While the NWSA's new strategy would end following the 1875 Supreme Court ruling in Minor v. Happersett, An Appeal to the Women of the United States laid the groundwork for the next pivotal moment in women's battle for suffrage, to come one year later at the nation's centennial: the 1876 Declaration of Rights of the Women of the United States.

The Adventures of Mickey Mouse

London : Printed for the Author and sold at her House in White-Harte Street , 1750
(click for more details about A Letter Humbly Address'd to the Right Honourable the Earl of Chesterfield)
View all from this seller>