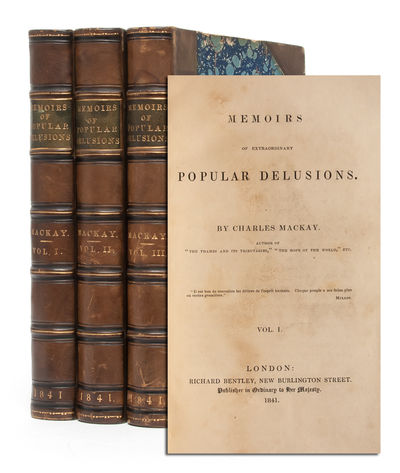 by Mackay, Charles
London: Richard Bentley, 1841. First edition. Near Fine. A handsome set in contemporary three-quarter calf over marbled boards, with gilt and morocco labels to spines. Orange endpapers. With binders ticket of E. Watson of Marylebone to front pastedown of each. Gentle shelfwear to bottoms of boards. Bound without the half-title in volume I; half-titles present in volumes II-III. Else complete with all five plates, some plates with dampstaining. Minor scattered foxing throughout, but generally a clean set. Quite desirable in this early binding.

"Men, it has been well said, think in herds; it will be seen that they go mad in herds, while they only recover their senses slowly, and one by one." Scottish journalist Charles Mackay's early study in crowd psychology, Memoirs sets out to debunk sensational issues ranging from alchemy, fortune-telling and haunted houses with large-scale and serious political issues such as crusades and economic bubbles. Across the three volumes, Mackay walks his readers through three different fields. While Volume I tackles Economic Delusions, Volume II handles Peculiar Follies and Volume III emphasizes Philosophical Delusions. Near Fine. (Inventory #: 3142)
$9,500.00 add to cart or Buy Direct from
Whitmore Rare Books
Share this item

The Works of Theodore Roosevelt (Signed Limited Edition in 24 vols.)

The Young Abolitionists; or, Conversations on Slavery

Boston : The Anti-Slavery Office , 1848
(click for more details about The Young Abolitionists; or, Conversations on Slavery)
View all from this seller>