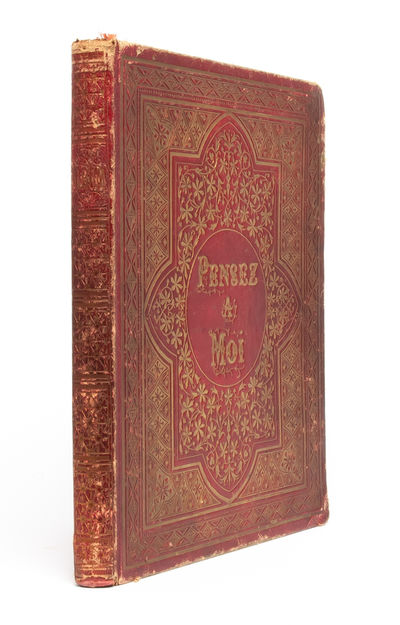 by [Women's Social History] [Travel] Laura L. Earl
Kentucky, Wisconsin, Illinois, Kansas, Minnesota, Ohio, Wyoming, Michigan, South Dakota, Colorado, 1924. Red leather sheep over card, ornately stamped in gilt. Album measures 8 x 9.75 inches and is comprised of 108 manuscript pages in a variety of hands, with multiple entries per page. Also includes two pasted-in newspaper clippings and a series of loosely inserted ephemera (two obituary clippings for the book's owner, five calling cards, a church bulletin, a gown ad, an envelope with a death notice of a friend, and a car rental flyer from Oklahoma). Tracing the life of Laura Nethers nee Earl from her girlhood and marriage to her old age. Obituaries and census records show that Laura was a resident of Colorado Springs for 56 years, following her family's move from the South through the Western US.

The inscription to the first page of the album reveals it to be a gift: "1860. A Christmas gift from father. Covington KY." Above this is the ownership stamp of Laura L. Earl. Little did Laura know, the album would follow her across 64 years and to a variety of states, documenting her relationships and major moments in her life. For researchers, it is an opportunity to trace a woman's development from one century to the next, across multiple states in the South and West, as she grew into a teacher, wife, and woman's club activist. Growing up in Kentucky, Laura's family moved West. Entries show that she and her father lived awhile in Minnesota, and she became a teacher in Wisconsin before marrying and settling in Colorado Springs. Entries come from family, pastors, students, neighbors, and friends. Many entries show women's bonds across large stretches of space, and together they show what a mobile lifestyle women were increasingly living. No longer confined so a small radius or single homestead, they were maintaining relationships and making friends across the miles.

Some early entries, like that of Celia E. Hay (Illinois 1878) are traditional in nature: "Over our hearts and into our lives, shadows may sometimes fall But the sunshine is never wholly dead And heaven is shadowless overhead And God is over all." Students politely thank her for her work and hope they made an impact too: "I ever remain your true friend James U. Cobb. To Miss Laura Earl much Respected Teacher Ellensboro Wisconsin Feb 25, 1872." People write poetic verses on friendship or her new marriage throughout.

Yet more often, entries are personal. In 1879, Laura's father leaves her a humorous message that "It is ten o'clock and your sixty-one year old father expects a long trip to the Injun Reservation two hundred miles north in the morning...So you see I cannot write any tonight." Elva Walker writes from Colorado in 1885 "We will ever remember our camping trip...and going in a cave" and John Dietrich writes of the same trip "Did it rain while we were camping! I hope we will meet again soon." In August 1919, a friend Emma Eggleston writes an original piece about their recent travel, titled Pike's Peak by Auto which begins "19 and 19 was a year to remember, from the last of July to the last of September" and which documents in 36 verses the landscapes they passed and the friendship they strengthened while driving. Moments like these are a reminder of changing times -- of early attitudes toward indigenous tribes, or of women's freedom as suffrage approached.

A charter member of the Colorado Women's Club and a participant in Frances Willard's Women's Christian Temperance Union according to her obituary, Laura's friendship album is a rich space for researchers to trace her movements through communities in the West, for genealogists to study the families and lives of contributors, and for historians to track which entries come from other educated women and activists. The present is one of the best we've seen. (Inventory #: 3357)
$2,250.00 add to cart or Buy Direct from
Whitmore Rare Books
Share this item

Paris : Brentano's , 1895
(click for more details about Sonnets to the Memory of Frederick Douglass (Presentation Copy))

A Treatise on the Immutability of Moral Truth

London : Printed for A. Hamilton, Jun., and Sold by C. Dilly, G. Robinson, T. Cadell, T. Lewis, J. Walter, and R. Faulder , 1783
(click for more details about A Treatise on the Immutability of Moral Truth)
View all from this seller>