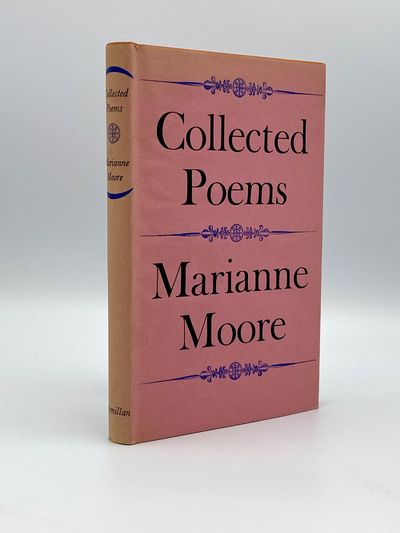 by MOORE, Marianne
New York: Macmillan, 1951. A very fresh, bright jacket with only mild toning to spine. 8vo. 180 pages. With errata slip laid-in before text of the poems. Original orange cloth, gilt-lettered on spine; dust jacket. First American 'edition' from sheets of the English second impression, the first issue, with integral title leaf. One of the rarest books in the Moore canon: One of about 40 copies for the author (see below). PRESENTATION COPY, inscribed by Moore to William Yeo, with note beneath inscription "N. B. errata-slip" and "as of December 17th" above the copyright date on the verso of the title. This copy has browning to the inner half of the free endpapers from binding glue, affecting errata slip, which is a character of every copy we've seen. "In a strict sense, these copies were never issued.... Faber and Faber printed its first impression and also printed and bound for Macmillan, New York, an impression of 1,500 copies. When these arrived in New York, presumably in time for a projected publication date of November 1951, they were seized by U.S. customs officials - not, however, before part of the shipment had been released to Macmillan. Of those released, about forty copies were inscribed by Moore for presentation and a few others were sent out as review copies. Theses review and presentation copies constitute the firsst issue of the second impression" (Abbott A10.a2a). (Inventory #: 406015)
$2,500.00 add to cart Available from Riverrun Books
Share this item

The Way We Live Now

London : Karsten Schubert , 1991
(click for more details about The Way We Live Now)
View all from this seller>