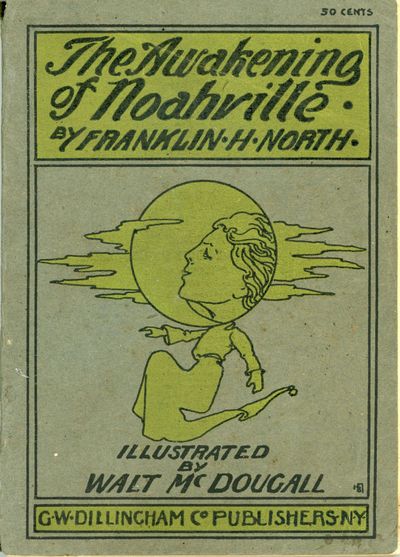 by North, Franklin H.
New York: G. W. Dillingham Company Publishers, 1900. Octavo, pp. [1-4] [i] ii-iv 5-383 [384: blank], numerous illustrations, some full page, by Walt McDougall, one map, original pictorial gray wrappers printed in green and black. First edition. Published in 1898 by the New York Publishing Company in cloth and in paper wrappers, this is a remainder issue with cancel title leaf and new wrappers, issued as number 68 of "Dillingham's American Authors Library," October 1900. "Burlesque of the adventure story of the day, perhaps with reference to Mark Twain's A CONNECTICUT YANKEE AT KING ARTHUR'S COURT, plus general suggestions of the lost-race romance." - Bleiler, Science-Fiction: The Early Years 1685. "A humorous satire recounts the exploits of two Yankees in a sleepy medieval country where they introduce nineteenth-century technology. At first the standard of living improves and class lines weaken; but eventually a new moneyed class establishes trusts, aliens and laborers agitate, and a gigantic tunnel project miscarries, flooding the entire country." - Roemer, The Obsolete Necessity, p. 204. Clareson, Science Fiction in America, 1870s-1930s 598. Sargent, British and American Utopian Literature, 1516-1985, Additions. Teitler and Locke, By the World Forgot (2013) 926. Reginald 10752. Not in Bleiler (1948; 1978). Wright (III) 3996. Not in Kopp, Lewis, Negley or Rooney. Wrappers worn at edges, a few leaves dog-eared, a very good copy. A scarce book; copies in wrappers are rare. (#165928) (Inventory #: 165928)
$450.00 add to cart or Buy Direct from L.W. Currey
Share this item
L.W. Currey Inc.
Offered by