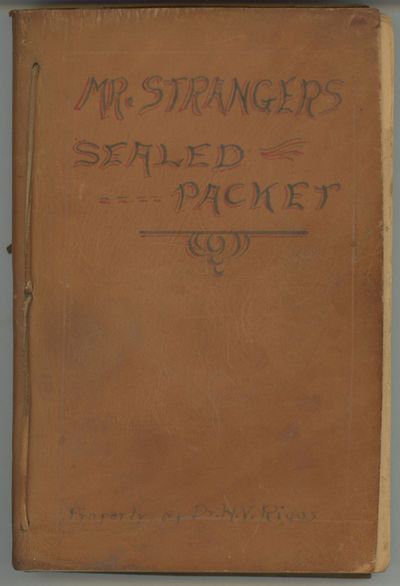 by MacColl, Hugh
New York: George Munro's Sons, 1890. Octavo, pp. [1-2: ad] [i-iii] iv [1] 2-338 [339-348: ads], the spine panel is intact but the front and rear covers have been removed and the whole has been bound into a leather cover with leather tie. First U.S. edition, later printing. A later printing of George Munro's "Seaside Library Pocket Edition" number 1319, the first American edition of MR. STRANGER'S SEALED PACKET, first published in England by Chatto & Windus in 1889. In this copy one of the advertisements is offering a 1898 bicycle. "An interplanetary science fiction novel, written by a mathematician, in the classic British mode of Greg's ACROSS THE ZODIAC. The protagonist travels to Mars in an electrically controlled antigravity spacecraft and undergoes adventures among its denizens." - Locke, Voyages in Space 136. "Clearly influenced Wells, but also a precursor of E. R. Burroughs." - Suvin, Victorian Science Fiction in the UK, p. 38-9. "Literate, but diffuse, and weakly plotted. If condensed, it would be one of the better of the interplanetaries of the day." - Bleiler, Science-Fiction: The Early Years 1390. "MR. STRANGER'S SEALED PACKET is not a particularly exciting adventure story, but the fact that it is an adventure story and nothing more places it at the head of what was ultimately to become a solid if not very prolific tradition of British interplanetary romances virtually devoid of any Utopian impulse." - Stableford, New Atlantis II, pp. 172-3. Anatomy of Wonder (2004) II-690. Locke, A Spectrum of Fantasy, p. 146. Locke, Voyages in Space (2011) V 449. Sargent, British and American Utopian Literature, 1516-1985, p. 81. Bleiler (1978), p. 129. Reginald 09418. Topp, Victorian Yellowbacks & Paperbacks, 1849-1905, III, p. 220. The top eighth of the first leaf (printing a statement by Charles Garvice about America book pirates) is missing, the title leaf and the contents leaf have short horizontal closed tears, the last two leaves of text and the terminal advertising leaves have tiny chips to margins. The book is printed on low quality pulp paper, but it is still supple and the book can be read. This is a rare edition of an important early interplanetary romance. (#165901) (Inventory #: 165901)
$150.00 add to cart or Buy Direct from L.W. Currey
Share this item
L.W. Currey Inc.
Offered by

THE LAST CELT: A BIO-BIBLIOGRAPHY OF ROBERT ERVIN HOWARD

West Kingston, Rhode Island : Donald M. Grant , 1992
(click for more details about GUMMITCH AND FRIENDS ..)
View all from this seller>