THE CRACK OF DOOM 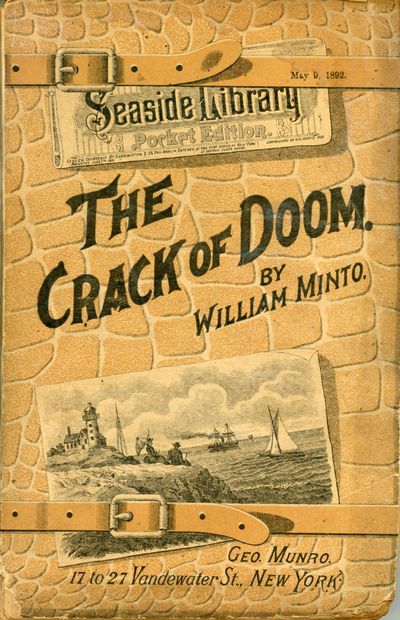 by Minto, William
New York: George Munro, 1892. Small octavo, pp. 318, pictorial wrappers. Later edition. Issued as "Seaside Library Pocket Edition," number 1993 (May 9, 1892). The first U.S. edition was published by Harper in 1886 as number 530 of their paperbound "Franklin Square Library" series for 20¢. Romance and melodrama in the near future when it appears likely that a comet will strike the Earth. An example of a "peculiar sub-genre [of eschatological fantasy] of 'frustrated apocalypse stories' whose authors are interested in the psychology of imminent doom and are content to allow a deus ex machina to save the day." - Stableford, Scientific Romance in Britain 1890-1950, p. 35. "A book that does not deserve its reputation. The title is the most interesting part." - Bleiler, Science-Fiction: The Early Years 1517. Clarke, Tale of the Future (1978), p. 12. Clute and Nicholls (eds), The Encyclopedia of Science Fiction (1993), p. 811. Locke, A Spectrum of Fantasy, p. 158. Stableford, Scientific Romance in Britain 1890-1950, p. 35. Suvin, Victorian Science Fiction in the UK, p. 30. Bleiler (1978), p. 140. Reginald 37976. Spine ends chipped, text block tanned, pages wavy, a reading copy. The three-volume British edition is rare and this edition and the various other cheap American pirated editions are uncommon. (#165924) (Inventory #: 165924)
$100.00 add to cart or Buy Direct from L.W. Currey
Share this item
L.W. Currey Inc.
Offered by