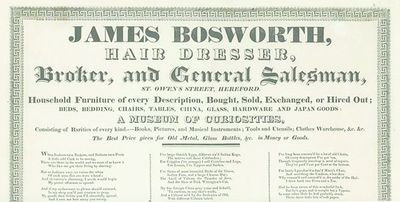 Not found on OCLC or COPAC

by BOSWORTH, JAMES
Hereford; Watkins and Wright, Printers, May 19, 1821, 1918. The only recorded copy. Not found on OCLC or COPAC. Skillfully washed, archivally backed and repaired at the folds and edges; in fine condition.. Broadside advertisement and poem, 53.5 x 42 cm, with a caption title in six types of various sizes, followed by a 57-stanza poem printed in three and four columns, surrounded by an ornate typographical border. A rare and unusual general merchant advertisement cast in the form of a broadside ballad, and an interesting example of advertising directed to the working class of the British Industrial Revolution. James Bosworth was a prominent Hereford merchant who used innovative methods to market his extraordinary array of goods and services - his Museum of Curiosities - and was notable for his pioneering role in tailoring and marketing consumer goods to the working class. His large format advertisements, which appeared in the Hereford Journal as well as separately, as here, began in the 1820s and were repeated for at least 20 years. The only similar example recorded is in the Sept. 29, 1841 issue of the Hereford Journal, which was noted by Alison Toplis in The Clothing Trade in Provincial England 1800-1850, who did not locate a copy of this 1821 example: "The Bosworth advertisement . . . was one of the rare examples of advertising targeting the working-class consumer . . . He had regularly supplied overseers of the poor with ready made clothing since the 1820s. Bosworth's broadside, a catalogue in verse of his wares and services, is classic and amusing doggerel: "With humble submission, / I beg your permission, / My Stock to submit to your view, / And most earnestly crave, / Your patronage to have, As your interest I'll every pursue." "So without more digression, / I'll name my profession, / And then give my Catalogue large; / James Bosworth by name, / A Hair Dresser I am, / Cut and shave at a moderate charge." "I'm a Broker also, Buy high, and sell low, / Wigs of all sort and sizes I make / for beau or for belle / Head dresses I sell, / And good in exchange I will make.". (Inventory #: 28253)
$1,250.00 add to cart or Buy Direct from
Brick Row Book Shop
Share this item

London: n. p., [circa 1880-1886] , 1880
(click for more details about Lithographed portrait of James McNeill Whistler, after a chalk sketch by Paul Adolphe Rajon)
View all from this seller>