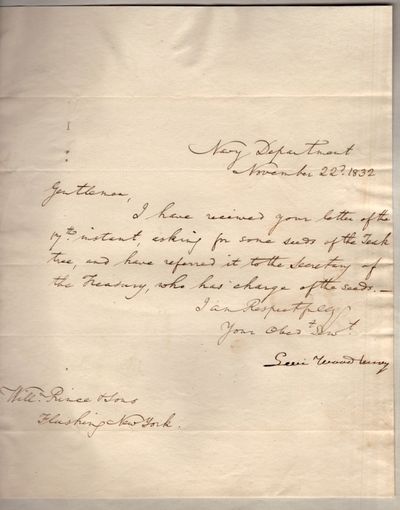 by [Levi Woodbury]
Washington DC: n.p., 1832. Letter. Very good. Letter dated November 22d, 1832. Approx. 8" x 10", one page, signed at the bottom by Woodbury. The left edge of the letter is neatly tipped onto a larger sheet of paper with "Levi Woodbury Sec. of Navy" written in pencil at the top (The title is not written in Woodbury's hand). The contents of the signed letter read - "Gentleman, I have received your letter of the 17th instant, asking for some seeds of the Tesk tree, and have refereed it to the Secretary of the Treasury, who has charge of the seeds.- I am respectfully Your Obed Servt [signed] Levi Woodbury. Addressed at bottom "Willm. Prince & Sons Flushing, New York." Levi Woodbury, 1789-1851, was Secretary of the Navy during Andrew Jackson's administration, United States Senator from New Hampshire, and an Associate Justice of the United States Supreme Court. The receiver of this letter William Prince (of William Prince and Son's, Flushing, New York) was a known United States Horticulturist. (Inventory #: 19323)
$250.00 add to cart or Buy Direct from Americana Books
Share this item

History of the Town of Sutton, Massachusetts, From 1704 to 1876; Including Grafton Until 1735; Millbury Until 1813; and Parts of Northbridge, Upton and Auburn

Worcester : Sanford & Company , 1878
(click for more details about History of the Town of Sutton, Massachusetts, From 1704 to 1876; Including Grafton Until 1735; Millbury Until 1813; and Parts of Northbridge, Upton and Auburn)

Concord, New Hampshire : Privately Printed at the Rumford Press , 1948
(click for more details about Ancestry of Colonel John Harrington Stevens and his wife Frances Helen Miller)
View all from this seller>