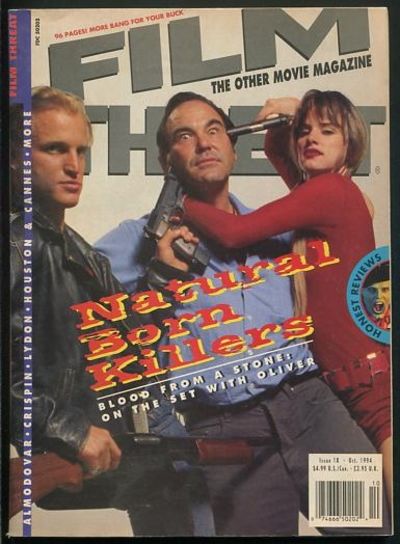 by (Gore, Christian, ed.)
Beverly Hills CA: LFP Inc.. Near Fine. 1994. (No. 18). Magazine. [nice clean, non-subscription copy (no address label affixed), with just a touch of wear at a couple of corners]. The primary feature of this issue is the 20-page cover story on Oliver Stone's controversial film NATURAL BORN KILLERS, incorporating an interview with co-star Juliette Lewis, and a separate long interview with Stone. (Was NBK really "the most controversial film of the decade," though?) Also in this issue: reports from that year's Cannes and Houston film festivals, and a feature called "Idol Threats," blurbed as follows: "Meet some bright new faces in the biz. Learn all about them in one paragraph and stare at their exciting photograph." (The six thus featured: Jorg Buttgereit, Michelle Handleman, Tamra Davis, Leif Jonker, Sarah Jacobson, Chrstine Martin.) . (Inventory #: 25445)
$25.00 add to cart Available from ReadInk
Share this item
ReadInk
Offered by