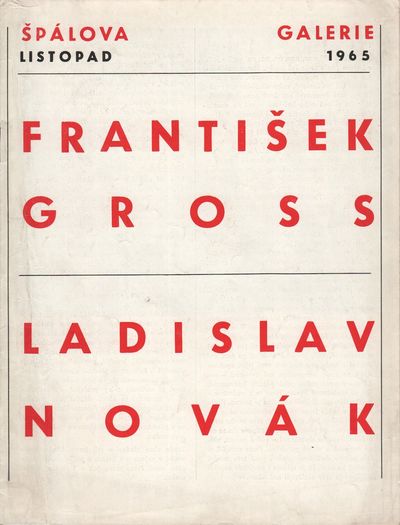 Prague: SČSVU, 1965. Octavo (21.5 × 16.5 cm). Original pictorial self-wrappers; [16] pp. Eight black-and-white reproductions. About very good. With a long introduction by literary and art critic Jindřich Chalupecký (1910-1990), a poem by Novák, artist biographies and lists of works exhibited. An important exhibition held at the Václav Špála Gallery, a hugely influential gallery in the relatively liberal mid-1960s, where Chalupecký also created many international links in his programming (among others, Chalupecký arranged a Duchamp retrospective in 1969 and supported young Czech performance artists). The liberal period of the 1960s, which resulted in the infamous Prague Spring, would soon come to an end: after the Soviet Invasion and ensuing wave of repressions, arts and culture would be under strict ideological control into the late 1980s. The present exhibition combined the lettrist work of Gross with that of Novák, an artist and concrete poet not affiliated with any group and interested, above all, in the combination of letter and image. Gross was an early member of the Czech post-war artist collective "Skupina 42" (Group 42), formally founded in 1940, during the German Protectorate. The group was forbidden by the Communist government in 1948, but its members and artists continued to work and impact the Czech art scene well into the 1970s. "Skupina 42" was significantly shaped by the experience of war and the German occupation. It combined pre-war tendencies such as cubism, futurism, and constructivism with existentialist and surrealist thought and images. Nevertheless it also sought to counteract a certain academic quality in art and was drawn to a kind of urban realism: the city in its manifold forms was an important theme, and ties to American literature and art were also strong. Outside the Czech Republic, KVK, OCLC show the copies at the British Library, Getty, and Tate. (Inventory #: P6499)
$100.00 add to cart or Buy Direct from
Bernett Penka Rare Books
Share this item