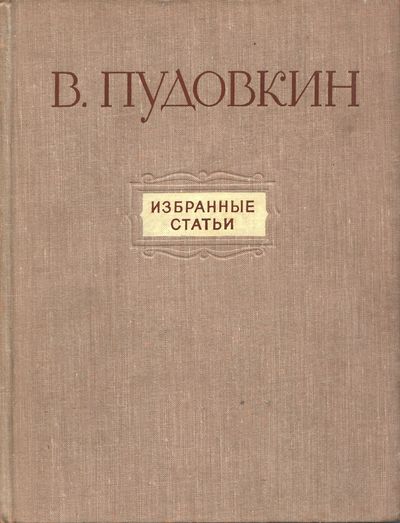 by Pudovkin, V[sevolod] and Vsesoiuznyi Gosudarstvennyi Institut Kinematografii [All-Union State Institute of Cinematography]
Moscow: Gosudarstvennoe izdatel'stvo Iskusstvo, 1955. Octavo (22.5 Ã— 18.3 cm). Publisher's beige cloth; 462, [2] pp. Frontis portrait; numerous leaves of plates. Private inventory stamp to front pastedown; first few leaves very lightly soiled; very good. A collection of essays by the Soviet film director, actor, and screenwriter Vsevolod I. Pudovkin (1893-1953), an important theoretician of montage alongside Sergei Eisenstein. With sections on cinema directing; the role of the actor and the Stanislavsky system; film criticism; and impressions about foreign film. With a preface, a bibliography of all articles published by Pudovkin from 1923-1953, as well as a complete annotated list of his films. (Inventory #: P6166)
$100.00 add to cart or Buy Direct from
Bernett Penka Rare Books
Share this item