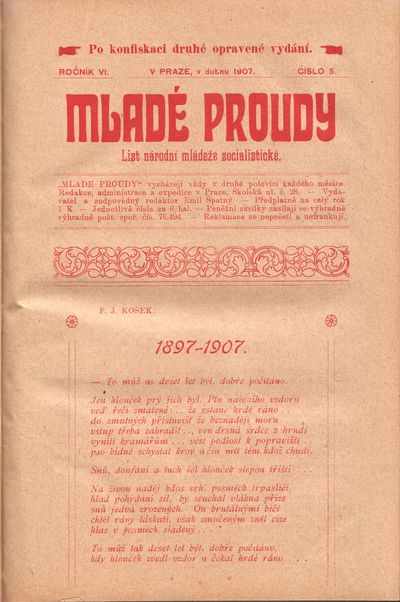 by Špatný, Emil, editor
Prague: V. Rejmon, 1901-1948. Octavos (22.2 × 14.7 cm). Contemporary half-cloth; 192 pp. of consecutive pagination. Wrappers lightly worn; frequent annotations by the editor, with his owner inscription to the first page; else good or better. Complete early run of this long-standing Czech journal for socialist youth, with articles on topics such as antireligiosity, liberalism, socialism, pacifist demonstrations, May Day celebrations, overviews of events in Silesia and Moravia, reports on various worker's and leftist youth clubs. With many censored passages blanked out; many issues are re-issues following confiscation by the censor. This appears to be the editor's copy (Emil Špatný), with copious annotations, often explaining which passages were banned and for what reason. Together, thirty-seven vols. were published, with significant pauses, such as during WWI and the Protectorate years. Despite its long run, the journal is very scarce institutionally. Not in Švec. The Czech National Library only holds five yearly runs. Outside the Czech Republic, KVK, OCLC show issues at IISG Amsterdam and a single issue at the Hoover. (Inventory #: P6272)
$125.00 add to cart or Buy Direct from
Bernett Penka Rare Books
Share this item