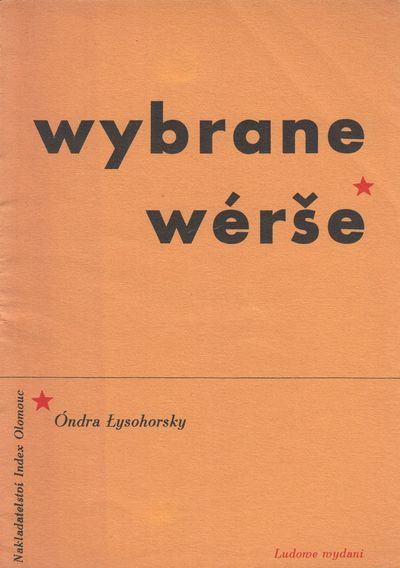 by Łysohorsky, Óndra (Lysohorsky, i.e. Erwin Goj, 1905-1989)
Olomouc: Index, 1936. Octavo (18.5 × 13.3 cm). Original printed wrappers; 34, [2] pp. Signed and inscribed by the author to the Czech poet Jiří Taufer. Very good. Scarce work by this Silesian poet, who became famous for defending the rights of speakers of the so-called Lach dialects, a group of dialects situated between the Czech and Polish languages. Although Łysohorsky grew up speaking German and initially published in German, he later refused to write in standard Czech, publishing numerous works in Lachian. A scholar of Slavic studies, he systematized the grammar of Lachian and created the first published works using this dialect. Claiming persecution by Czech authorities, who refused to recognize Lachian as an independent language, he later asked Stalin to intercede on his behalf. He spent time in the Soviet Union and Boris Pasternak even translated several volumes of his poetry. Because of his controversial status in Czechoslovakia, his books were later banned and removed from libraries and the book trade. Preface by Jozef Šénowsky (Šinovský, real name Josef Bilan, 1902-1973), who also authored numerous works in the Cieszyn Silesian dialect. Inscribed by Łysohorsky to Czech poet Jiří Taufer (1911-1986). Design by Zdeněk Rossmann. Outside the Czech Republic, KVK, OCLC show copies at British Library, St. Gallen, Oxford, and Yale. (Inventory #: P5674)
$275.00 add to cart or Buy Direct from
Bernett Penka Rare Books
Share this item