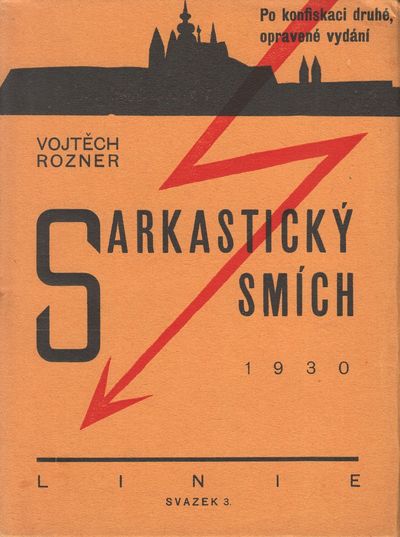 by Rozner, Vojtěch
Prague: Linie, 1930. Octavo (19.6 × 14.3 cm). Original pictorial wrappers; 102, [8] pp. Fine, uncut and unopened copy. Scarce third volume published by Edice Linie (Linie Series), with a striking, unattributed avant-gardistic wrapper design. Rozner (1905-1991) was a Czech poet, writer, and journalist from Liberec, who published numerous books of satirical verse, which took aim at seemingly any and all writers and public intellectuals of interwar Czechoslovakia. Among them were Karel Čapek, Viktor Dyk, Vítězslav Nezval, and many others. A series by the same name was published in Czech Budějovice after 1931, by the regional avant-garde group Linie, which embraced cubist and modernist elements in the visual arts; it is not clear whether Rozner was affiliated with them, as little information exists on him. The front wrapper features the printed note "Second edition, following confiscation" ("Po konfiskaci druhé, opravené vydání") and the colophon notes that the entire print run of 500 copies (plus 100 copies not for sale) was confiscated, leading to the publication of this second issue. KVK and OCLC show copies (all of the second edition) at the Czech National Library, Bayerische Staatsbibliothek, and Harvard. (Inventory #: P5850)
$350.00 add to cart or Buy Direct from
Bernett Penka Rare Books
Share this item


(click for more details about Utopia: Een Tweemaandelijks Tijdschrift voor Wetenschappelijk Amusement. No. 1 (n.d., early 1976) through 10 (September 1978) plus special boxed edition on architect J.M. Jujol (all published))
View all from this seller>