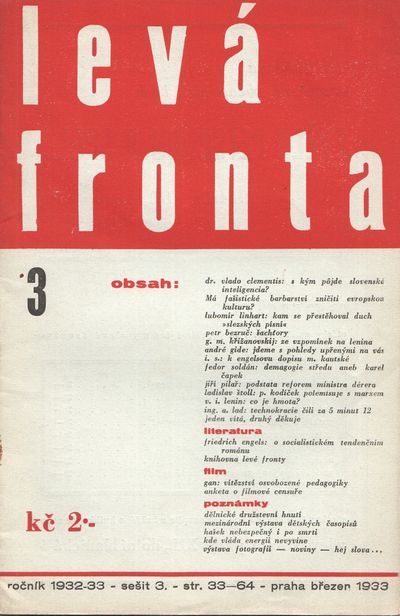 by Štoll, Ladislav, editor
Prague: Levá fronta, 1930-1933. Octavos (22.2 × 14.5 cm). Original staple-stitched printed wrappers; 16-32 pp. each (consecutive pagination). Two issues with small nicks to wrappers; occasional underlining; overall about very good issues. Significant run of this scarce Czech leftist journal of art, literature, and politics, associated with the eponymous group. Levá fronta, or the Left Front, was founded in 1929, and replaced the avant-garde group Devětsil, which was based around such key figures as Karel Teige, Jaroslav Seifert and Adolf Hoffmeister. Under Teige, the group had increasingly shifted from allegiance to West European influences toward a greater orientation on Moscow and the Russian avant-garde, leading to discord. With the "Left Front," core members of Devětsil as well as more outspoken communist critics sought to create a new print organ that would explicitly propagate socialist culture and unite the intelligentsia with the working class in its creative efforts. Among its members were Teige, Stanislav Kostka Neumann, Bedřich Václavek, Julius Fučík, Ivan Sekanina, Gertruda Sekaninová, Ladislav Štoll, Vladislav Vančura, the architects Karel Honzík and Jiří Kroha, Lubomír Linhart, and others. In addition to publishing this journal, the group published a series of brochures on communist and pro-Soviet matters, the Knihovna levé fronty, or "Left front library," which covered economics, history, politics, and culture. It also organized many events and public discussions, eventually creating branches in other Czechoslovak cities and subdividing into sections concerned with architecture, film, economics, and other fields of inquiry. These issues contain articles on the Five Year Plan, proletarian literature, the hunger crisis in Subcarpathia, Lenin, book reviews, May First celebrations in 1932, students and workers in the USSR, Kautsky and Marx, pacifism and anti-Fascism, the psychology of Soviet citizens, Karel Čapek, film and theatre, publishing in the USSR, etc. Teige apparently designed the spare, but attractive wrappers, and the typographic layout throughout the issues. See "Karel Teige a typografie", ills. 383 on p. 159. A German version also appeared for some time, under the title Linksfront. The journal was published from 1930-1933; the A few of these issues contain supplements and inserts. Scarce in the original wrappers. (Inventory #: P6103)
$850.00 add to cart or Buy Direct from
Bernett Penka Rare Books
Share this item


(click for more details about Parovyi verbliud [The steam camel])


(click for more details about Bulletin international du surréalisme. Mezinárodní buletin surrealismu. No. 1 (9 Avril 1935))
View all from this seller>